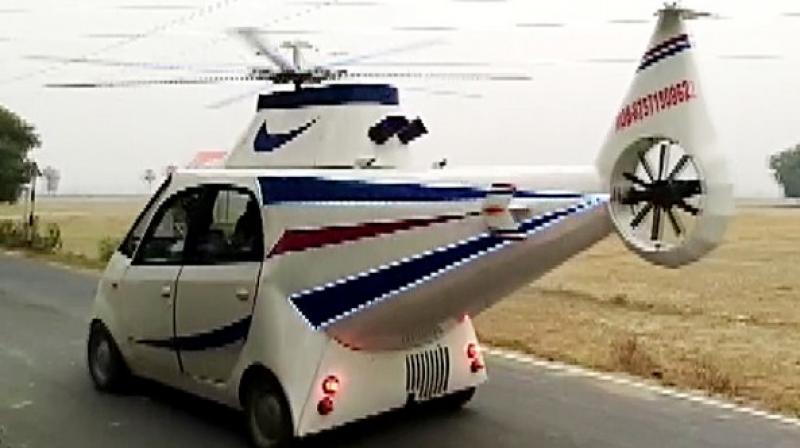 It took almost seven months for Mithilesh and his brother to complete the design and in addition, an investment of seven lakh rupees went into the project. (Photo: ANI)

Chhapra: Even though he could not fulfil his dream of designing and flying a helicopter, 24-year-old Mithilesh Prasad has made his car look like one. The helicopter look-a-like car is now becoming a centre of attraction in Chhapra.

Mithilesh, a pipe fitter hailing from Simari village in Baniyapur, has modified his Tata Nano car by incorporating basic design features of a helicopter.

Even though the car cannot fly, it has design features of a conventional helicopter-like main rotor, tail boom and tail rotor. The rotors and side panels are also fitted with colourful LED lights.

It took almost seven months for Mithilesh and his brother to complete the design and in addition, an investment of seven lakh rupees went into the project.

A 12th class pass out, the youngster always dreamt of making helicopters and feels content to drive his "helicopter car" on the road even if he cannot fly one.

Talking about his creation, Mithilesh said, "It was my dream since childhood that I construct a helicopter on my own and fly in it. But I do not have a strong background so I made my car look like a helicopter."