Winner says her dream is to be recording artist and music, she says, is her passion. 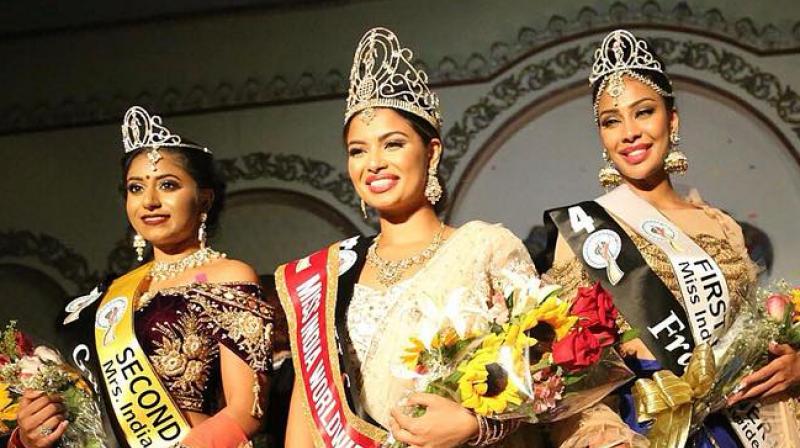 Madhu Valli (centre) after winning the title. The beauty pageant attracts people of Indian origin from across the world. (Photo: Facebook/ Madhu Valli)

Washington: Madhu Valli, an emerging hip hop artist and a student of criminal law at George Mason University in Virginia, has been crowned as Miss India Worldwide 2017.

Stephanie Madavane from France was declared runner up at the 26th edition of the beauty pageant held in New Jersey on Sunday.

Sangeeta Bahadur from Guyana took the third spot at the pageant that had contestants from 18 countries.

"I want to be the next biggest bridge between Bollywood and Hollywood," Valli, 20, said, a day after winning the pageant.

Her latest album was released a day earlier. The winner said her dream is to be a recording artist and music, she said, is her passion.

She started learning vocals at 8.

The beauty pageant attracts people of Indian origin from across the world. It provides a platform to showcase how Indian culture has been preserved thousands of miles away, she said.

"I definitely want to speak to a lot of young Indian American women about women empowerment and positive self- image," Valli said.

"I love both my countries, India and the US and I always wanted to discover a way to be a leader in both!" she said.

She is an interior designer by profession and mother of two children who wants to be a social activist and become a voice for women's empowerment.

Organised by New York-based India Festival Committee, Miss India Worldwide is the only international Indian pageant with affiliates in over 35 countries and considered among the top ethnic pageants in the world.