Lewis Hamilton started from pole position and led from beginning to end to capture the 54th race title of his career. 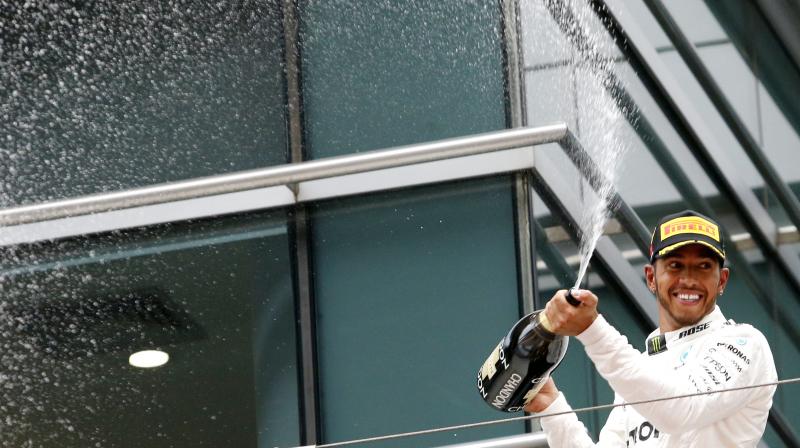 Shanghai: Mercedes driver Lewis Hamilton steered clear of a chaotic start to the Chinese Grand Prix and coasted to victory on Sunday, claiming his fifth title in Shanghai.

Hamilton started from pole position and led from beginning to end to capture the 54th race title of his career and his first of the new Formula One season.

Ferrari's Sebastian Vettel recovered from a mishap-filled start to finish in second place, 6.2 seconds behind the Mercedes driver.

Red Bull's Max Verstappen improved from 16th position on the starting grid to finish third, fighting off a spirited challenge from teammate Daniel Ricciardo on the final lap.

Ricciardo ended up in fourth position, followed by Ferrari's Kimi Raikkonen in fifth and Mercedes' Valtteri Bottas in sixth.

A drama-filled start on a wet track from rain earlier in the day set the stage for Hamilton's victory and Mercedes' recovery after Vettel surprisingly captured the season's opening race at the Australian Grand Prix last month.

The drivers had barely left the starting grid when Williams' Lance Stroll bumped against Sergio Perez of Force India and spun off the track into a bed of gravel. A short time later later, on the fourth lap, Antonio Giovinazzi hit a wet patch and slammed into the wall, severely damaging his Sauber car and bringing the race to a halt again.

During the safety-car slowdowns to remove both cars from the track, the top drivers pitted to change tires, reshuffling the starting order. Hamilton emerged from the fray with a hold on the lead, but Vettel and Bottas slipped back several places and had to fight the rest of the race to catch up.

"I'm trying to keep the car on the track and look after the tires at the same time, it was definitely really tough," Hamilton said.

Verstappen, meanwhile, drove his Red Bull masterfully through traffic to move up from near the back of the starting grid to second place by lap 11.

The young Dutch driver was even threatening Hamilton for the lead at one point, but fell back and eventually got passed by Vettel midway through the race.

The first half of the race brought plenty of daring passes as Vettel, Verstappen, Ricciardo and Raikkonen battled for second place behind Hamilton. Vettel's pass of Verstappen on lap 28 was one of the most breathtaking of the day as the Ferrari driver surged past when Verstappen locked up momentarily.

"Obviously, we were a little unfortunate with the safety car early on, but even if it wasn't there, you never know how it could have impacted on the race," he said.

After an exciting start, though, the second half of the race was short of drama as the top drivers maintained their positions to the end.

A number of drivers failed to finish. Stroll and Giovinazzi never returned after their early mishaps, and they were joined on the sidelines on lap 20 when McLaren's Stoffel Vandoorne and Toro Rosso's Daniil Kvyat retired with mechanical problems.

McLaren's other driver, Fernando Alonso, was also forced to stop on lap 34 with what he said was a driveshaft problem. The veteran Spanish driver had been running eighth at the time, a strong race considering McLaren's considerable mechanical issues to start the season.