Srishti Bakshi is leading a team of hundreds of female volunteers on a 3,800-km walk through India across 260 days. 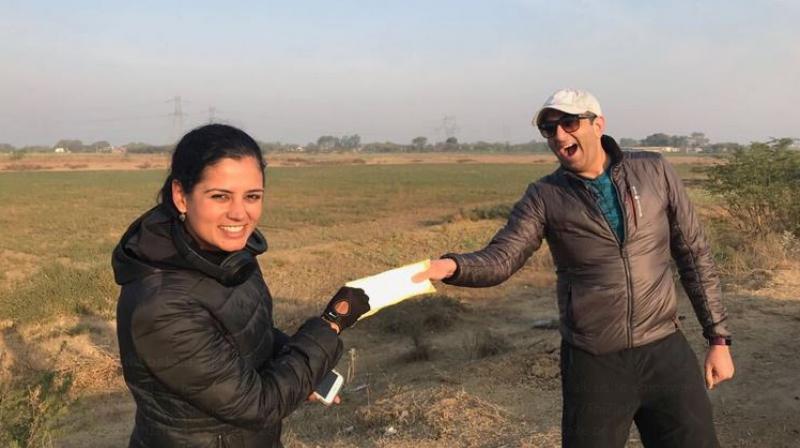 During the walk, Srishti Bakshi leads workshops for women in rural communities on digital and financial literacy, leadership and health. (Photo: Twitter/ @BakshiSrishti)

London: Britain’s Queen Elizabeth II on Thursday recognised Srishti Bakshi from India as the 26th Commonwealth Point of Light in honour of her exceptional service to empowering women in India.

Srishti is the founder of the CrossBow Miles movement. After seeing that India’s National Crime Records Bureau recorded 327,394 cases of violence against women in 2015, Srishti decided to make a statement and spread her message of gender equality across the country.

She is leading a team of hundreds of female volunteers on a 3,800-km walk through India across 260 days.

“In achieving one billion steps, her CrossBow Steps movement has spread the message of women’s empowerment and safety across India. I hope the Points of Light award helps Shrishti spread her message globally and I congratulate her for her tremendous creativity and determination,” said Dominic Asquith, British high commissioner to India, who presented Srishti with her award to mark International Women’s Day.

During the walk, Srishti leads workshops for women in rural communities on digital and financial literacy, leadership and health.

She has overseen the creation of a mobile app where people from across the world can upload steps collected from their phone pedometers and join the campaign’s ‘Billion Steps For Women’ drive.

She said, “It is overwhelming and humbling to be recognised for our efforts to build a safer and better India for women, by empowering them.

“At CrossBow Miles, we have always believed in doing our duty without expectation of a reward, but a recognition like this reaffirms our belief in the work we are doing.”

The Points of Light awards recognise outstanding volunteers every day of the week - people whose service is making a difference in their communities and whose story can inspire others to creative innovative solutions to social challenges in their own communities and beyond.

In the lead-up to the Commonwealth Heads of Government Meeting (CHOGM) in London in April, the Queen - as head of the Commonwealth - is thanking inspirational volunteers across the 53 Commonwealth nations as part of a special series of the award.

Since 2014 British Prime Minister Theresa May has been recognising a daily Point of Light from the UK, with almost 900 now recognised.

Commonwealth Points of Light is a continuation of this programme - with a special series of awards recognising inspirational volunteers throughout the Commonwealth in the lead-up to the CHOGM in London in April.

One volunteer will be recognised from each of the Commonwealth countries in the 53 week days preceding the Heads of Government meeting.