The historic reform was given royal assent, the final step in a process that began with a national postal vote in September. 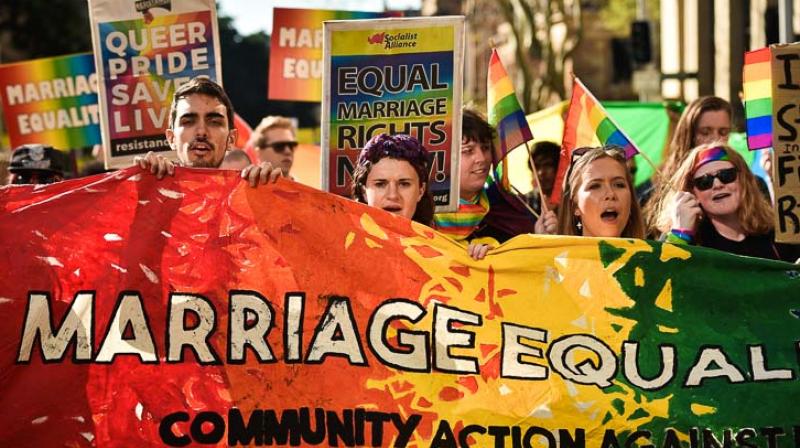 Gay couples who have already married overseas will have their unions officially recognised from Saturday, when the bill comes into full effect. (Photo: AFP)

Sydney: Wedding venues were preparing for a rush of couples eager to tie the knot after same-sex marriage was signed into Australian law Friday, with Prime Minister Malcolm Turnbull already boasting several invites.

The historic reform was given royal assent, the final step in a process that began with a national postal vote in September.

"The act has now passed into Australian law," said the Queen's representative, Governor-General Peter Cosgrove, at a ceremony in Canberra.

Gay couples who have already married overseas will have their unions officially recognised from Saturday, when the bill comes into full effect.

Those wanting to wed can lodge a notice to marry Saturday, but will have to wait a calendar month before exchanging vows, meaning the first weddings are expected on January 9.

All but four members of the 150-seat lower House of Representatives voted in support of marriage equality on Thursday, sparking jubilant scenes in parliament.

The legislation was passed without any religious freedom amendments that some were pushing for.

"It is a big Australian hug for all same-sex couples, saying we love and respect you, now go out there and get married," he said.

"This is an historic day in the struggle for civil rights in Australia," Inner West Council Mayor Darcy Byrne said.

"Council will make its facilities -- halls, community centres and parks -- available free of hire fees for 100 days for any same-sex couples wishing to get married."

Many couples have long waited for the law to change and venues are expected to be in heavy demand to make their unions legal.

The Paddington Uniting Church, in Sydney's gay heartland and with a gay minister, said it had been bombarded with requests from couples to get married.

"I think there are lots of LGBTIQ people in the church who would be keen to have their union celebrated in the church," Reverend Ben Gilmore told broadcaster ABC.

Turnbull is also preparing for a busy January, revealing he has had several wedding invites.

"I have had a few, I think January is going to be very busy," he told reporters.

"There'll be plenty of business for the caterers, I would think over the next few months."

One anticipated wedding will be the Liberal Party's Tim Wilson, who proposed to his partner Ryan Bolger while speaking on gay marriage on the floor of parliament earlier this week.

The demand for same-sex weddings is set to be a moneyspinner for various sectors of the economy, including hospitality, recreation and professional services, according to an analysis by ANZ Bank.

"We assume half of all couples who want to marry could do so within 12 months of marriage equality legislation," said senior economist Cherelle Murphy.

Gay marriage is now recognised in more than 20 countries, of which 16 are in Europe. It was authorised on Tuesday by Austria's top court by 2019 at the latest.