Following Haryana BJP VP's regressive comment regarding women going out at night, ladies take to social media to stand up for their rights. 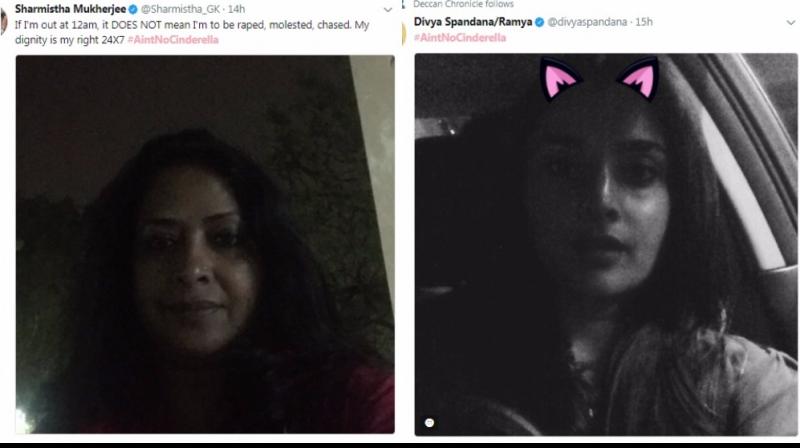 "Why was she allowed to roam around at night?" was what, Haryana BJP vice president Ramveer Bhatti's had to say in response to the stalking of Varnika Kundu by Vikas Barala, son of Bharatiya Janata Party's (BJP) Haryana unit President Subhash Barala in Chandigarh.

Since then, innumerable tweets with the hashtag #AintNoCinderella has flooded twitter with politicians and commoners coming out alike in their defiance of Bhatti's regressive remarks.

While Bhatti has since then backtracked on his remarks, a host of women have gone on to post images of themselves with the hashtag on twitter reminding everyone that they have every right to choose what they do and till how late they stay out.

Congress  leader Sharmishta Mukherjee and actor-turned-politician Divya Spandana were a few who have voiced their opinion on the callous remark meted out by Bhatti.

Congress leader and the daughter of the former President, Sharmishta Mukherjee took to twitter to remind that her dignity is her right.

If I'm out at 12am, it DOES NOT mean I'm to be raped, molested, chased. My dignity is my right 24X7 #AintNoCinderella pic.twitter.com/6SN0I5NbSN

Actor-turned-politician Spandana, simply tweeted a selfie with the hashtag #AintNoCinderella.

While one Palak Sharma from Delhi defiantly commented that it was midnight and she was still out.

Pooja went on to address a 'regressive' India and stated that it is her choice to do as she pleases.

Dear regressive India,
I will do as I please, night or day. Don't ever think you have the right to stop me #AintNoCinderella pic.twitter.com/oHIKgbhoeA

I am a free soul! I am a woman of today ! I live with my free will #AintNoCinderella pic.twitter.com/afSmmBdH6t

While Surbhi Dwivedi mentioned that it is no one's business what she does or till what time she stays out.

What I wear, till what time I stay out, whom I hang around with,bla bla.. is none of your business bcoz I #AintNoCinderella pic.twitter.com/hlFEE0y2Qq

Another Nabakalpita Bora stressed upon the need for public spaces for women.

No man can stop me from going out whenever I want. Public spaces for women! #AintNoCinderella pic.twitter.com/jaipo3Dtai

The daughter of an IAS officer, Varnika Kundu was allegedly stalked and harassed by Vikas Barala, son of BJP Haryana unit President Subhash Barala. Arrested for the same on August 5, he was, however, granted bail on the same day.