Swati, who once had fear of height in her earlier days of her life, did not even dream of being an army officer. 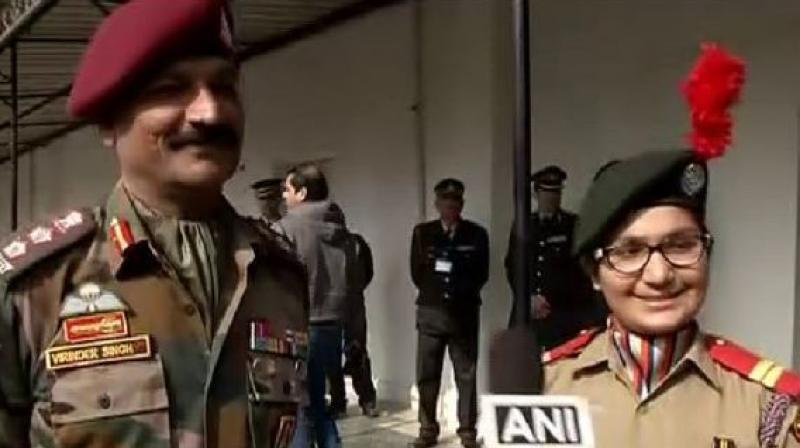 New Delhi: National Cadet Corps (NCC) candidate Swati Singh and her father Colonel Virender Singh are no ordinary father - daughter duo, as they are the first in the Indian Army to perform a parajumping together.

Swati always aspired to be an Army officer and jumping along with her father was an emotional moment for this 20-year-old girl.

She has credited her courage and strength to the NCC, as she describes to be a life changing experience.

"It was breath taking experience actually and it was a very nice experience as it is the best memory of my life till now," she said.

Swati described that being a part of NCC makes a person learn a lot and encouraged taking risk in life.

"I think para-jump was that part which not only taught me to value things, but to learn from it and risk life and be adventurous as well," she added.

Swati, who once had fear of height in her earlier days of her life, did not even dream of being an army officer.

"I stood firm in my resolve to become a paratrooper like him. So the NCC gave me an opportunity to fulfill a dream that I always had. It was very emotional moment because I get doing something with your father," Swati added.

Her father, Colonel Virender Singh said, "It is a great feeling that in the army this is the first time it happened that a father and daughter jumped together," he said.
Colonel Singh added that he always trained his daughters as his sons and always motivated them to be the best in their life.

Feeling proud his daughter's feat, Colonel Singh, said "If her aim is to be an army officer then I hope and pray that whatever she desires, she ultimately gets it and that would be a proud moment for me."

Swati's incredible story gives us a lesson that if we face our fear and then we can conquer it and make it our strength.