Though this is not a full-fledged start of a revolution of having 'designer babies', the first steps, however, have been laid. 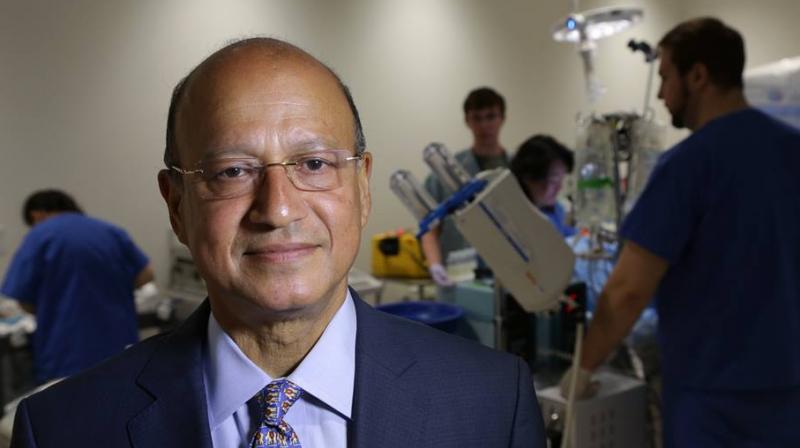 This is the first time such a feat has been achieved (Photo: Facebook/OHSU)

New Delhi: For the first time, genetically modified human embryos have been developed in the US, and Kashmir-born doctor Sanjeev Kaul has played a lead role in this breakthrough.

Scientists have now demonstrated an effective way of using a gene-editing tool to correct a disease-causing gene mutation in human embryos and stop it from passing to future generations.

Though this is not a full-fledged start of a revolution of having 'designer babies', the first steps, however, have been laid. China attempted this earlier.

A team of scientists has altered human embryos using a new technique called CRISPR CAS9 that edits genes and in this case it helped remove a fatal mutation that leads to heart attacks.

This now opens up an ethical 'Pandora's Box' if germline repairs and enhancements may become a thing in vogue.

As of now, the human embryos were not implanted in humans. But this now opens up exciting prospects of the world having designer babies soon.

A team of South Korean, Chinese and American scientists has identified how they could edit out a faulty gene that causes heart attacks in later life due to the thickening of heart walls.

One of the team members is Dr Kaul, who was born in Kashmir, studied in New Delhi and later immigrated to America.

"Although the rare heart mutation affects men and women of all ages, it is a common cause of sudden cardiac arrest in young people, and it could be eliminated in one generation in a particular family," said co-author Kaul, a professor of medicine (cardiovascular medicine) in the OHSU School of Medicine and director of the OHSU Knight Cardiovascular Institute.

"Thanks to advances in stem cell technologies and gene editing, we are finally starting to address disease-causing mutations that impact potentially millions of people," says Juan Carlos Izpisua Belmonte, a professor in California-based Salk Institutes Gene Expression Laboratory and a corresponding author of the paper.

"Gene editing is still in its infancy so even though this preliminary effort was found to be safe and effective, it is crucial that we continue to proceed with the utmost caution, paying the highest attention to ethical considerations."

CRISPR CAS9 or Clustered Regularly Interspaced Short Palindromic Repeats is a kind of a precise molecular scissor the scientists use to edit faulty genes.

Only selected healthy embryos were allowed to grow further that too only for a few days. The embryos were not implanted in humans.

The big step forward is that a higher percentage embryos were found to have been repaired in this American experiment than earlier attempts.

CRISPR holds promise for correcting mutations in the human genome to prevent genetic disease. Using an enzyme called Cas9, it is possible to snip a specific target sequence on a mutant gene.

The new study found that human embryos effectively repair these breaks in the mutant gene using the normal copy of this gene from a second parent as a template.

The technique already has been used in animals for generating mutant models; however, the new study is the first to demonstrate that technique can be used in human embryos to convert mutant genes back to normal.

The study also demonstrated a way for overcoming a crucial problem in genome editing in embryos known as mosaicism.

Mosaicism refers to an outcome when not all cells in a multicellular embryo get repaired and some cells still carry a mutation.

"Every generation on would carry this repair because we have removed the disease-causing gene variant from that family's lineage," said senior author Shoukhrat Mitalipov, PhD, who directs the Center for Embryonic Cell and Gene Therapy at Oregon Health and Science University (OHSU), in Portland, Oregon, USA.

"By using this technique, it is possible to reduce the burden of this heritable disease on the family and eventually the human population."

The study provides new insight into a technique that could apply to thousands of inherited genetic disorders affecting millions of people worldwide.

The gene-editing technique described in this study, done in concert with in vitro fertilisation, could provide a new avenue for people with known heritable disease-causing genetic mutations to eliminate the risk of passing the disease to their children.

"If proven safe, this technique could potentially decrease the number of cycles needed for people trying to have children free of genetic disease," said co-author Paula Amato, associate professor of obstetrics and gynaecology in the OHSU School of Medicine.

Designer babies could be in the offing

"Our results demonstrate the great potential of embryonic gene editing, but we must continue to realistically assess the risks as well as the benefits," adds Belmonte.

In this landmark study, the researchers worked with healthy donated human oocytes and sperm carrying the genetic mutation that causes cardiomyopathy or the thickening of heart walls.

Embryos created in this study were used to answer pre- clinical questions about safety and effectiveness. The study noted that "genome editing approaches must be further optimised" before moving to clinical trials.

"This research significantly advances scientific understanding of the procedures that would be necessary to ensure the safety and efficacy of germline gene correction," said Daniel Dorsa, senior vice president for research at OHSU.

"The ethical considerations of moving this technology to clinical trials are complex and deserve significant public engagement before we can answer the broader question of whether it's in humanity's interest to alter human genes for future generations.