Newsmakers   07 May 2019  Freedom after 500 days: Timeline of case against 2 Reuters Myanmar journalists
Newsmakers

Freedom after 500 days: Timeline of case against 2 Reuters Myanmar journalists

Wa Lone and Kyaw Soe Oo were released as part of an amnesty of 6,520 prisoners by President Win Myint. 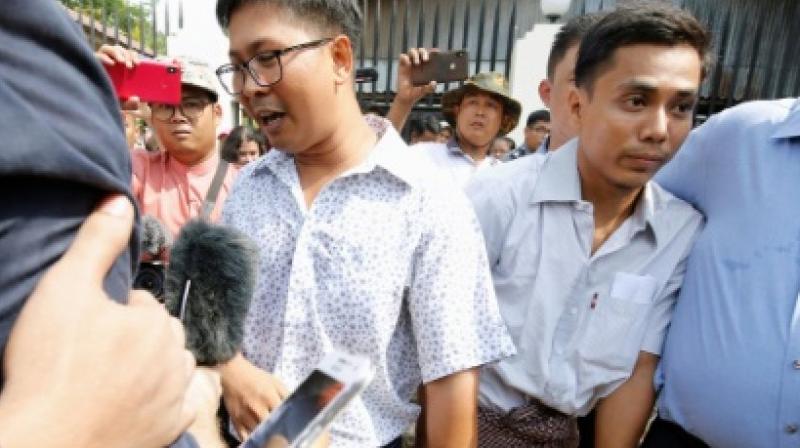 Mumbai: After spending more than 500 days in jail, two Reuters journalists who were arrested in 2017, were released on Tuesday.

Wa Lone and Kyaw Soe Oo were released as part of an amnesty of 6,520 prisoners by President Win Myint.

The journalists were awarded the Pulitzer Prize for international reporting last month.

“I’m really happy and excited to see my family and my colleagues. I can’t wait to go to my newsroom," Wa Lone said.

At the time of their arrests, they had been working on an investigation into the killing of 10 Rohingya Muslim men and boys in a village in Rakhine state. Their arrest was seen as an assault on press freedom and raised questions about Myanmar's democracy.

The timeline of the key events in the case:

December 12-13, 2017: Wa Lone and Kyaw Soe Oo are arrested in Yangon after being invited to meet police at a restaurant. They were charged under the Official Secrets Act. For the next two weeks, the duo was held at a secret interrogation camp.

December 18, 2017: Myanmar military said that it has discovered mass graves in the village of Inn Din, in western Rakhine state.

December 27, 2017: The reporters were produced in the court and were remanded into custody.

On the same day, Myanmar military said its soldiers murdered 10 captured Muslims, whose bodies were those discovered by the security forces in the mass gravess.

February 1, 2018: A police witness, Major Min Thant said under cross-examination that the information in the documents the reporters were holding during the time of their arrest had already been published in newspapers.

The court denied the bail request.

February 6, 2018: Police witness Second Lieutenant Tin Htwe Oo, who testified that he was part of the arrest team, said he burned the notes he made at the time, but gave no reason for his act.

February 8, 2018: Reuters published the investigation that the reporters had been working on.

It described how security forces and local Rakhine Buddhists were involved in the killing of the 10 Rohingya Muslim men and boys buried in the mass graves at Inn Din.

February 11, 2018: The government said the action will be taken against the members of its security forces in connection with the killing but it is not related to Reuters report.

February 28, 2018: A civilian witness for the prosecution read from notes on his hand when asked about the location of the journalists’ arrests. When challenged he said he wrote on his hand to jog his memory while testifying because he was forgetful.

March 7, 2018: A police officer who took part in a post-arrest search of Wa Lone’s family home testified that officers were looking for material “related to news”.

March 28, 2018: Lawyers for Wa Lone and Kyaw Soe Oo asked the court to throw out the case as there was insufficient evidence to support charges against the pair.

“Wa Lone and Kyaw Soe Oo are being prosecuted simply because they reported the news,” Clooney said in a statement.

April 20, 2018: Prosecution witness Police Captain Moe Yan Naing told the court that a police brigadier general had given orders to entrap Wa Lone by giving him “secret documents” and then arresting him.

Prosecutors later argued that Moe Yan Naing should be declared an unreliable witness, however, the judge rejected the request.

April 29, 2018: Moe Yan Naing was sentenced to a year in prison for violating Myanmar’s Police Disciplinary Act by talking to Wa Lone.

May 16, 2018: Police Lance Corporal Naing Lin, the officer Moe Yan Naing said was ordered to entrap Wa Lone, told the court he met the reporters, but denied giving them documents.

June 11, 2018: A senior police officer denied during cross-examination by defence lawyers that the reporters were held at an interrogation camp, mistreated or asked if they were “spies” during questioning.

Afterwards, Wa Lone and Kyaw Soe Oo disputed this account, and said they were handcuffed and questioned every two hours by different officers for about three days during their two-week detention period at the Aung Tha Pyay police special branch interrogation centre.

July 2, 2018: Prosecutors and defence lawyers delivered final arguments in the pre-trial phase of the case.

July 9, 2018: The court charged Wa Lone and Kyaw Soe Oo with breaching the colonial-era Official Secrets Act. Both journalists pleaded “not guilty” to the charges, and told the judge they “followed journalistic ethics”.

July 16, 2018: Wa Lone gave the first detailed account to the court of the night he and Kyaw Soe Oo were arrested. He said that Police Lance Corporal Naing Lin had called him at least twice on December 12 and demanded a meeting at which the officer abruptly handed both reporters some papers. He said they were arrested by plainclothes officers almost immediately after Naing Lin gave him the papers, which he did not have, time to look at.

July 17, 2018: On the second day of testimony, Wa Lone described how police deprived him and Kyaw Soe Oo of sleep for about three days and placed black hoods over their heads while transporting them to the interrogation centre.

Wa Lone said the interrogation focused on their reporting of the Inn Din killings, rather than on the documents they are accused of obtaining.

July 24, 2018: Kyaw Soe Oo testified that he was forced to kneel on the floor for hours after police found images of the men killed at Inn Din on his phone.

August 4, 2018: US Secretary of State Mike Pompeo called for the immediate release of two Reuters reporters at a meeting with Myanmar Foreign Minister Kyaw Tin on the sidelines of a regional conference in Singapore.

August 6, 2018: Defence witnesses testified to the integrity of the two journalists, with former teacher Ye Naing Moe, director of Yangon Journalism School, praising both reporters as curious and excellent students who had won multiple awards for stories focusing on the underprivileged and social issues.

They were jailed “for revealing the truth”, he said.

Sentence prompted global outrage and called for release from US, UK and UN as Reuters denounced the "false charges".

September 13, 2018: Suu Kyi pilloried after breaking her long silence on the case only to defend the court decision.

"They were not jailed because they were journalists" but because "the court has decided that they had broken the Official Secrets Act", she said.

January 11, 2019: Yangon High Court judge dismissed an appeal. The pair could take the case to Supreme Court for consideration or hope for a presidential pardon.