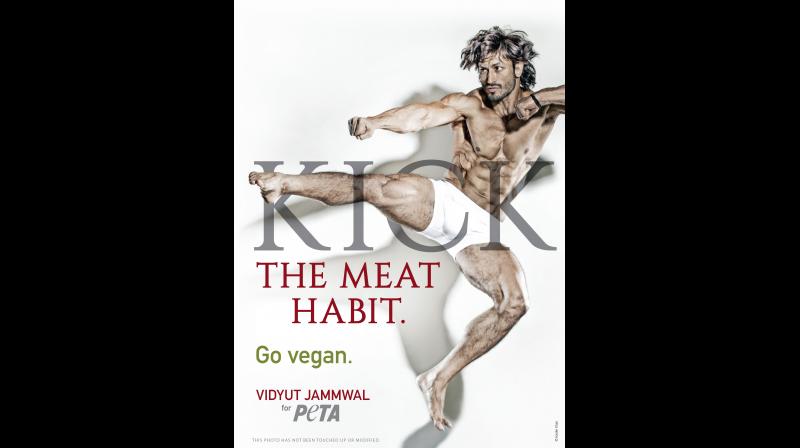 The campaign seems him appearing next to the words "Kick the Meat Habit. Go Vegan."

Mumbai: He left the audience in awe with his exceptional action stunts in the 2017 hit film Commando 2, and now, Vidyut Jammwal shows off his chiselled body, which he attributes to his vegan lifestyle and workout routine, in a hot new print campaign for People for the Ethical Treatment of Animals (PETA) India.

The campaign seems him appearing next to the words "Kick the Meat Habit. Go Vegan." The ad campaign is being released during India's National Nutrition Week (1–7 September).

Vegans are vegetarians who eat only fully plant-derived foods (leaving those derived from animals – such as milk and eggs, which are stolen from exploited cows and chickens, respectively – off their plates). The ad was shot by ace photographer Haider Khan.

"When people ask me where I get my protein from, I tell them [I get it from] exactly [the same place that] herbivorous animals like elephants, horses, and rhinos do: plants," says Jammwal. "Being vegan helps me keep fit. I love the way I feel."

Female calves endure the same abuse as their mothers – including being chained and raped using crude instruments for artificial insemination and experiencing the heartbreak of watching their calves being taken away from them shortly after birth. PETA India's eyewitness investigation of the country's dairy industry also documented that animals are routinely kicked and struck, denied veterinary care, and forced to stand and lie amidst piles of their own faeces.

Furthermore, a PETA India's video exposé "Glass Walls", showed most chickens used for their eggs are confined to a space that's smaller than an A4 sheet of paper and parts of their beaks are cut off with a hot blade to prevent them from pecking at each other out of frustration. Once their bodies wear out and they're no longer considered useful for egg production, they're sent to the slaughterhouse, where they're killed in full view of their companions.

In addition to sparing the lives of many animals each year, people who eat vegan reduce their risk of suffering from heart disease, diabetes, cancer, and obesity. And because of the disastrous environmental effects of the meat, egg, and dairy industries, the United Nations has concluded that a global shift towards vegan eating is necessary to combat the worst effects of climate change.