Manipur is prolific in arts and culture and its rich heritage is best reflected in its music. 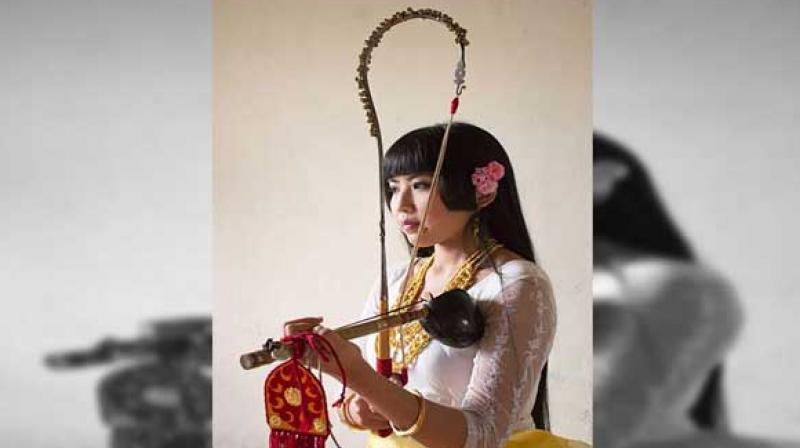 Mangka Mayanglambam, a Pena player, is striving to revive the rich folk culture and music of the state. (Photo: ANI)

Imphal: Mangka Mayanglambam is a Manipuri folk, classical and contemporary song performer and a pena player, who is singing her way to glory, taking the Manipur folk music to places.

India is well-known for its folk music. The folk music of its north eastern part speaks volumes of its diverse and rich culture shared by varied communities.

Manipur is prolific in arts and culture and its rich heritage is best reflected in its music. The various forms of folk music of Manipur can tantalize one's senses.

A young folk performer and a Pena player, Mangka Mayanglambam, is striving to revive the rich folk culture and music of the state.

Mangka was discovered at a very early age. She started her journey into Manipuri folk music under Guru Langathel Thoinu.

She said she started listening to folk music from a very young age because most of the artistes used to come to her house for Lai Hui every day. And that she was influenced by the Lai Haraoba songs and chose to practice folk music.

However, her biggest inspiration came from her artistic father, Mayanglambam Mangangsana, who plays, composes and writes for her.

Mangka first got noticed when she sang and performed 'Hada Shamaton' at the 8th ManipurInternational Polo in 2014.

Since then, Mangka has come a long way in the world of music and has achieved a commendable stature.

Her fame on the internet erupted when a group namely 'a house and a guitar' uploaded a short clip of her singing with her brother on YouTube.

She showcases her dancing skills with her poised structure and graceful body movements to the mood and flow of the music.

Over the years, Mangka's folk music performance has been recognized and she has won accolades globally.

Her new single Nura Pakhang, also known as 'Eu e Tu' in French was in collaboration with a Portuguese iconic music pop band has won her much appreciation.

Recently, she has collaborated with some international artistes from Hawaii, London and Japan as part of a project by Lai Hui.