The election was postponed from Sunday to today after the main opposition CPN-UML launched a protest over re-election in a ward. 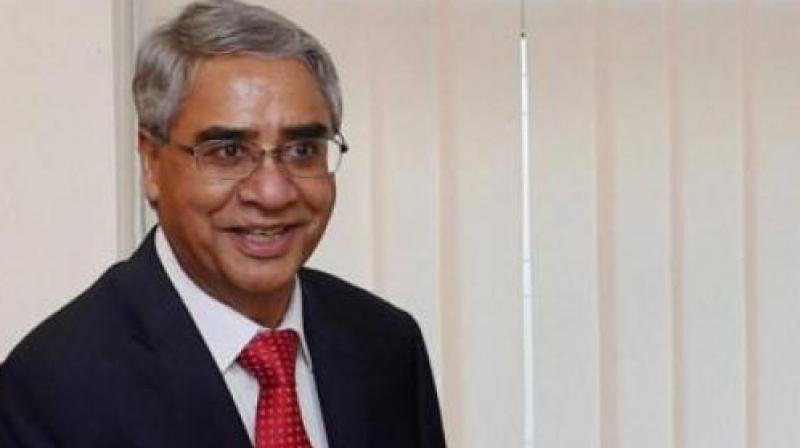 Deuba is likely to form a small Cabinet tomorrow which will be expanded in a few days and some of the Madhesi parties are also likely to join the coalition. (Photo: PTI)

Kathmandu: Veteran Nepalese politician Sher Bahadur Deuba is set to become Nepal's prime minister for the fourth time on Tuesday after the main opposition party decided to end the obstruction of parliament.

Nepal Parliament is conducting election to the post of Prime Minister this afternoon. Deuba, 70, is the sole candidate to contest in the prime minister election as the main opposition UML or any other party didn't register their candidacies. Deuba has the support of more than 50 per cent of the lawmakers needed for his election to the top post.

He needs to secure 297 votes in the 593-strong Parliament to prove his majority during today's election, and with the NC-Maoist Centre alliance enjoying 287 seats in Parliament and four other parties supporting the alliance having 21 seats, it looks plain sailing for Deuba.

The election was postponed from Sunday to today after the main opposition CPN-UML launched a protest over re-election in a ward.

However, now with the main opposition party agreeing to end obstruction of the parliament, Nepali Congress (NC) President Deuba is become the country's 40th prime minister.

The CPN-UML decided to end House obstruction after the ruling parties agreed to hold local elections in the remaining four provinces on June 28 and the provincial and parliamentary elections by January, 2018.

"We decided to end the obstruction in parliament after the ruling parties agreed to commit in the House to hold elections in the remaining four provinces and not repeating any irregularities," said former UML chairman Jhal Nath Khanal after the meeting between the government and the Opposition.

As per the Constitution, a candidate must secure a simple majority in parliament to get elected as the head of the government. CPN-Maoist Centre, Madhesi Peoples Rights Forum Democratic, Rastriya Prajatantra Party and other fringe parties have agreed to vote in favour of Deuba.

Deuba is likely to form a small Cabinet tomorrow which will be expanded in a few days and some of the Madhesi parties are also likely to join the coalition. The responsibility of conducting the second phase of local level election will rest upon Deuba.

Prachanda resigned on May 24 after a brief stint of nine months, honouring a power sharing understanding with the ruling coalition partner Nepali Congress to hand over the country's leadership to the largest party in Parliament.