Fayyaz has been visited by people from his family as well as Pakistan Air Force to witness his creation. 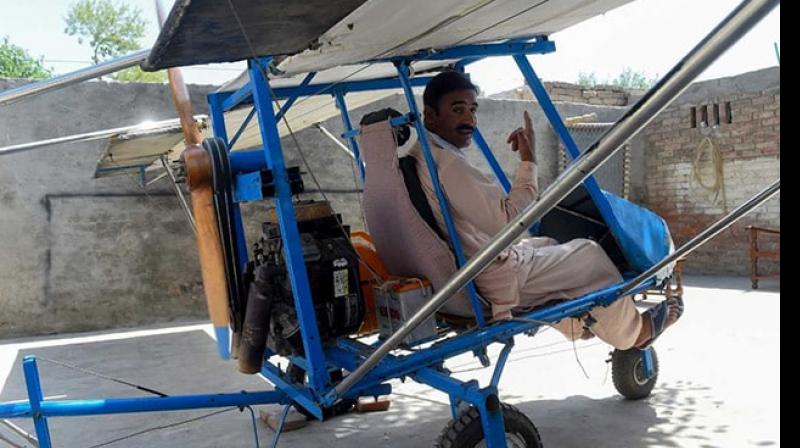 The story reported by Agence France-Presse talks about Muhammad Fayyaz, 32, a resident of Tabur village in Punjab province and his experiment which has got him appreciation and fame.

"I was literally in the air. I couldn't feel anything else," Fayyaz said of his first flight in a machine he learned to build mainly from viewing TV clips and online blueprints.

Fayyaz has been visited by people from his family as well as Pakistan Air Force to witness his creation which has found a place in his very home.

As a child, Fayyaz had dreamt of joining Air Force which he couldn’t do as his father passed away when he was in eighth grade forcing him to drop out and do menial jobs to feed his family.

Passionate to follow his dream, Fayyaz worked hard to save for his endeavour. He sold popcorn during the daytime and served as a watchman in the night shift to save money for the experiment.

He sold a part of his family land and took a loan to fund his dream. He persuaded a workshop employee to build a propeller for him.

He relied on internet and TV shows for information. There was trial and error. Some equipment had to be replaced, design had to be altered and wiring had to be reworked.

He was ready with his invention this February after two years of hard work.

“I used a small road, which was blocked by my friends, as the runway,” Fayyaz said.

The plane reached 120kph before taking off, Ameer Hussain, a witness who claims to have ridden alongside the plane in a motorcycle, told AFP.

It flew for about two to three kilometres before landing, a claim of Hussain which AFP couldn’t verify.

Confident of his success, Fayyaz chose to display his creation in front of the entire village on May 23, celebrated as Pakistan Day. But he was arrested by the local police before he could fly. The court released him after slapping a fine of Rs. 3,000/-.

Police officer Zafar Iqbal explained to AFP, "The plane was returned to him as a goodwill gesture. Should he obtain a flying license or permit, he is free to fly."

Fayyaz has been visited by people from the Pakistan Air Force twice to view the plane. The commander of a nearby base issued him a certificate which praises his "passion and dexterity" in building what it described as a "mini basic airplane".