Great grandmother from Mumbai gets her first tattoo

Inspired by daughter-in-law’s tattoo, Sharda Jhavar decided to get Shiva elements inked on her arm. 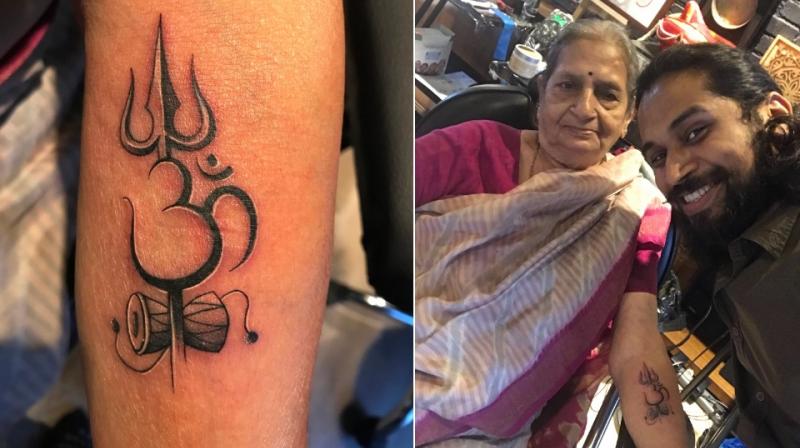 Jhavar says that the tattoo iis to show thankfulness and gratitude for a fulfilling life.

It was a moment to remember for Sharda Jhavar- a 91-yr old woman, who got her first tattoo by celebrity tattoo artist Vikas Malani at BodyCanvas Tattoos and Piercings.

When we asked her about the same, she said that being a very religious person and a staunch believer of Shiva, she actually wanted to get a Shiva portrait on her arm done. On seeing her daughter-in-law's tattoo, who too had gotten hers from Malani, she was further inspired and decided to get the Shiva elements done instead of the entire portrait.

Speaking about her decision to get a tattoo, Jhavar said, "As per tradition, if you have had a complete fulfilling and satisfying life, it is imperative to show thankfulness and gratitude by some means; hence the tattoo and it feels amazing to carry it."

Tattoo artist Vikas Malani, Co-founder of BodyCanvas Tattoos went on to add, "A woman getting her first tattoo done at the age of 91, is commendable and inking her was one of the most interesting and inspiring experiences in my tattoo career.”

He further said, “This lady is living life to the fullest, which also includes having a bucket list of things to be done and while accomplishing her bucket list, she doesn’t really care what the society thinks. In a country where women in India have always been controlled, she symbolises women moving out of the image set for them and exploring the world. “