Murad and Congolese doctor Denis Mukwege were jointly awarded prize for ‘efforts to end the use of sexual violence as a weapon of war.’ 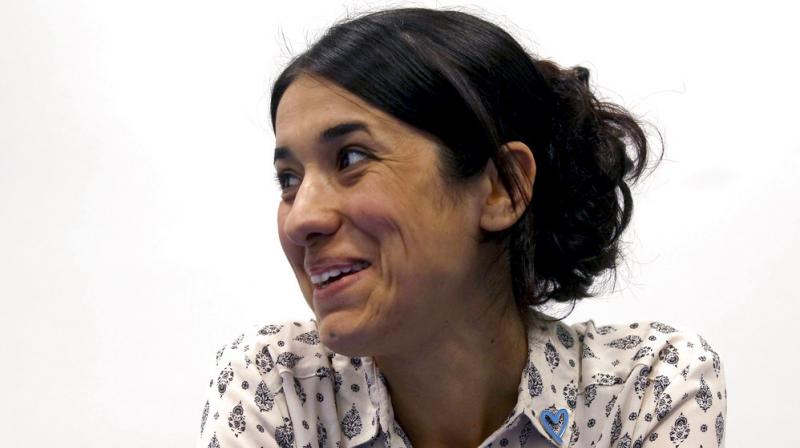 Baghdad: Nadia Murad survived the worst cruelties ever inflicted on her people, the Yazidis of Iraq, before becoming a global champion of their cause and winning the Nobel Peace Prize.

On Friday, Murad and Congolese doctor Denis Mukwege were jointly awarded the prize for their "efforts to end the use of sexual violence as a weapon of war," Nobel committee chairwoman Berit Reiss-Andersen said in unveiling the winners in Oslo.

The 25-year-old Murad, her thin, pale face framed by her long brown hair, once lived a quiet life in her village near the mountainous Yazidi stronghold of Sinjar in northern Iraq, close to the border with Syria.

But when the so-called Islamic State jihadist group stormed across swathes of the two countries in 2014, her fate changed forever and her nightmare began.

One day in August that year, pick-up trucks bearing the black flag of the jihadists swept into her village, Kocho. IS fighters set about killing the men, taking children captive to train them as fighters and condemning thousands of women to a life of forced labour and sexual slavery.

Today, Murad and her friend Lamia Haji Bashar, joint recipients of the EU's 2016 Sakharov human rights prize, continue the fight for the 3,000 Yazidis who remain missing, presumed still in captivity.

IS fighters wanted "to take our honour, but they lost their honour," said Murad, now a United Nations goodwill ambassador for survivors of human trafficking. It is an evil she personally experienced during a harrowing three months. After being captured by IS fighters, Murad was taken by force to Mosul, the de facto "capital" of the IS's self-declared caliphate.

During her ordeal she was held captive and repeatedly gang-raped, tortured and beaten. The jihadists organised slave markets for selling off the women and girls, and Yazidi women were forced to renounce their religion.

For the jihadists, with their ultra-strict interpretation of Islam, the Yazidis are seen as heretics. The Kurdish-speaking community follows an ancient religion, revering a single God and the "leader of the angels", represented by a peacock.

Like thousands of Yazidis, Murad was forcibly married to a jihadist, beaten and forced to wear makeup and tight clothes -- an experience she later related in front of the United Nations Security Council. "The first thing they did was they forced us to covert to Islam", Murad told AFP in 2016.

Shocked by the violence, Murad set about trying to escape, and managed to flee with the help of a Muslim family from Mosul. Armed with false identity papers, she managed to cross the few dozen kilometres (miles) to Iraqi Kurdistan, joining crowds of other displaced Yazidis in camps.

There, she learnt that six of her brothers and her mother had been killed. With the help of an organisation that assists Yazidis, she joined her sister in Germany, where she lives today. She has since dedicated herself to what she calls "our peoples' fight", before a well-known spokeswoman even before the #MeToo movement swept the world.

Many others have fled and remain in Iraqi Kurdistan, reluctant to return to their traditional lands. Slight, and softly-spoken Murad has now become a global voice, campaigning for justice for her people and for the acts committed by the jihadists to be recognised internationally as genocide.

And she and the Yazidis have won a high-profile supporter -- Lebanese-British lawyer and rights activist Amal Clooney, who also penned the foreword to Murad's book, "The Last Girl", published in 2017.

The same year, the UN Security Council committed to helping Iraq gather evidence of IS crimes.

Yet in contrast to all the tragedies that have befallen her, recent pictures on Murad's Twitter feed show happier times. In August, she announced her engagement to fellow Yazidi activist Abid Shamdeen.

"The struggle of our people brought us together & we will continue this path together," she wrote. Underneath, a photo showed her next to a young man in a bow tie, her face still framed by her long brown hair, but this time, bearing a broad smile.