He reached out to foreigners, who had participated in a conservation programme he runs, to ask for donations to pay for the water. 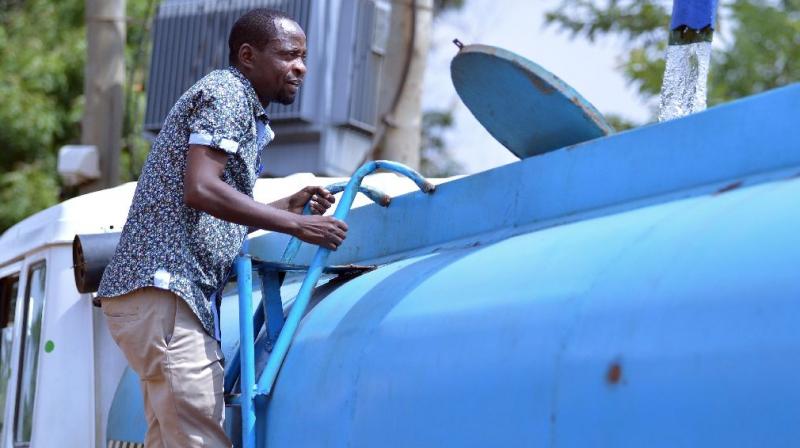 Patrick Kilonzo fills a hired bowser water tanker before embarking on a 70 kilometre journey to deliver the water to thirsty wildlife in the Tsavo West National Park in Kenya. (Photo: AFP)

Voi: In a wildlife sanctuary in southern Kenya the relentless sun has bleached savannah grasses and dried up rivers, turning water holes first into muddy pits and now, dust bowls.

Herds of elephant, buffalo and zebra have gathered near one of the holes, where for six months, pea farmer Patrick Mwalua has been delivering water to them in a rented blue truck.

After the rains failed for the third time in November, Mwalua was so distressed by the obviously weak and thirsty animals that he began seeking donations to bring water to the Taita Hills sanctuary.

The 41-year-old was haunted by the memory of a 2009 drought, which the International Fund for Animal Welfare estimates led to the loss of 40 percent of the animals in the neighbouring Tsavo West National Park.

"It was so sad. I saw it myself and I felt very bad and I said this thing should never happen again," he told AFP.

Over his lifetime, Mwalua has seen the climate change drastically, with droughts causing chronic water shortages and increased conflict between villagers and wildlife.

Thirsty elephants -- which can drink up to 190 litres (400 pints) of water in one sitting -- have in recent months carried out often deadly raids on villages in search of water.

To the majority of locals struggling to survive the failure of their crops, these wildlife neighbours are little more than a menace and competition for land and resources.

However Mwalua believes it is crucial to protect the wildlife, arguing "we are the voice of the animals".

He reached out to foreigners, who had participated in a conservation programme he runs, to ask for donations to pay for the $250 (237-euro) truckloads of water.

At first, he would pour it into natural water holes but quickly realised that much was soaked up by the baking earth, so turned instead to a cement hole near a tourist lodge.

The animals "come running the moment they see the truck, they even know the timings. When they are really thirsty they even drink when the truck is emptying," the lodge's assistant manager Alex Namunje told AFP.

A GoFundMe crowdfunding page, set up by an American friend, has raised over $200,000 -- most of that in the past two weeks, as word spread about Mwalua's initiative.

"It has blown my mind," said Mwalua, who plans to buy his own water truck and dig a borehole in the park.

Meanwhile the David Sheldrick Wildlife Trust -- famed for rearing orphan elephants -- has now joined him in trucking in water to the water hole.

In a sign of the crisis the region faces, the charity has drilled 13 boreholes over the years, Angela Sheldrick, who runs the trust, told AFP.

While conservationists praise Mwalua's efforts, they warn that climate change and human activity have affected water supply so badly it will take much more to solve the problem.

"It is a good initiative but how much water can we truck into Tsavo? How many boreholes can you sink?" asked Jacob Kipongoso, head of the Tsavo Heritage Foundation.

Conflict between humans and wildlife is only going to get worse, he believes.

One deadly clue is the snakes' behaviour.

Every morning, in Kipongoso's village, when women go to the water pumps, they see the swirling snake tracks in the sand.

Desperate for water and a cool place to shelter as drought and climate change affect their habitat, snakes increasingly come into contact with people.

As a result, snakebites have shot up so much in recent years that the Kenya Wildlife Service (KWS) is trying to amend a law to stop having to compensate those bitten, which costs millions of euros per year.

The main water source for Tsavo West is Lake Jipe, which straddles the border with Tanzania. According to Kipongoso, its level has dropped 10 metres (33 feet) in a decade.

He blames the water problems on "sheer human activity" in catchment areas.

In the nearby Amboseli park, during the 2009 drought, 14 elephants were killed by poachers, while another 99 died because of lack of water, according to KWS figures.

"What all that means is we need now to stop focusing on poaching and start facing the imminent catastrophe which is the mass death of elephants and wildlife from lack of water," Kipongoso said.

"The only way you can do that is landscape rehabilitation," he said, referring to reverting the land to its state before human activity changed it.

Mwalua's undertaking is exhausting. Bleary-eyed, he eats a quick breakfast of Swahili sweet bun and tea before embarking on the 70-kilometre (43-mile) journey.

Delivering the 12,000 litres of water is a slow, hour-long drive that he sometimes makes several times a day, despite suffering from kidney failure requiring twice-weekly dialysis.

But he perks up when he sees the waiting animals.

On a February afternoon, clouds gather above the savannah and a rare burst of rain fills the air with an earthy petrichor but doesn't stick around long enough to penetrate the soil.

Weeks of driving rain are needed to break the drought, and forecasters are already gloomy about the next rainy season due this month.