It was painted in 1945-46, almost seven decades ago, but yet holds the same amount of fascination for art lovers all over the country. 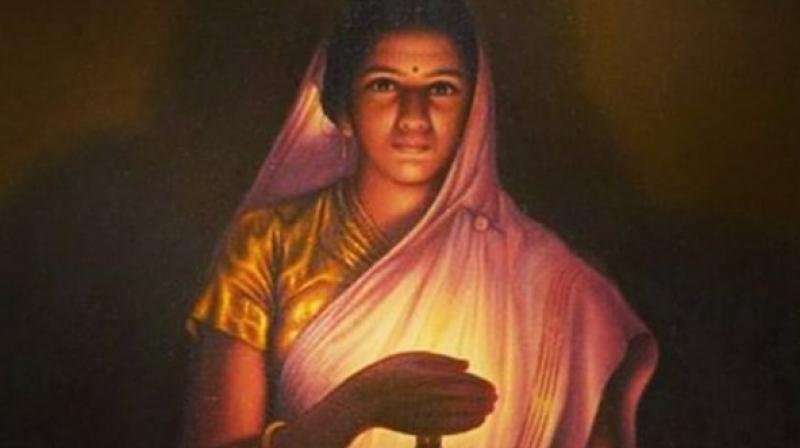 The painting was completed in three days (Photo: Instagram)

Mumbai: The girl holding the lamp in the celebrated painting 'Glow of Hope', also referred commonly as the "Woman With the Lamp", by S L Haldankar, has turned 100.

The painting, a watercolour masterpiece, is now housed in the Jaychama Rajendra Art Gallery at the Jaganmohan Palace in Mysore and is one of the most prized possessions as well as a major attractions at the gallery.

It was painted in 1945-46, almost seven decades ago, but yet holds the same amount of fascination for art lovers all over the country. Though the painting is by Haldankar, it has been wrongly attributed to legendary painter Raja Ravi Verma.

The girl in the painting is Haldankar's third daughter, Gita Uplekar, who turned 100 on February 2.

To mark the occasion, a small event was organised on Thursday at Kolhapur, where she resides since 1940s, after her marriage to jeweller Krishnakant Uplekar.

"I was 12 and lighting the Diwali diya when Bhau (Haldankar) saw me and asked me to pose for the sketch," Gita said. The painting was completed in three days, she added.

"It is a matter of pride for us that my mother's name is recognised by all art fans," Gita's daughter Parinita Shah said, adding that her mother relished her favourite ice cream on her 100th birthday.

Raja Uplekar, Gita's nephew told PTI that there was a demand from France for the painting to be sold at Rs 8 crore but the Mysore gallery did not part with the painting, which was bought from Haldankar at Rs 300.

When the painting was being done, Gita had to hold her pose for three or more hours continuously. There is a very interesting story about how the idea for this painting was conceived.

During Diwali, Haldankar saw his daughter in a beautiful saree with a candle and her hand woven around the flame to prevent the wind from blowing it out. The rays of the candle radiated from the gap within her fingers and it also illuminated her face. Haldankar decided to model a painting on the same

lines. The medium used was water colours on painted handmade paper as he wanted to prove that he can paint without a single mistake as mistakes made with oil paints cannot be rectified.

The painting is in a domain which is usually darkened with curtains to highlight the subtlety of the glowing candle. The effect of the painting is heightened by the shadow of the woman in the back.

He soon became a student of Dhurandhar and Cecil Burns. In 1908, he started the Haldankar Art Institute in Mumbai. Later, with other friends, he founded the Art School of India in 1918 and became its president.