'Obama Out': US Prez ending reign as pop culture king

Obama's cultural identity was intertwined with a liberal agenda that was a turnoff to many voters. 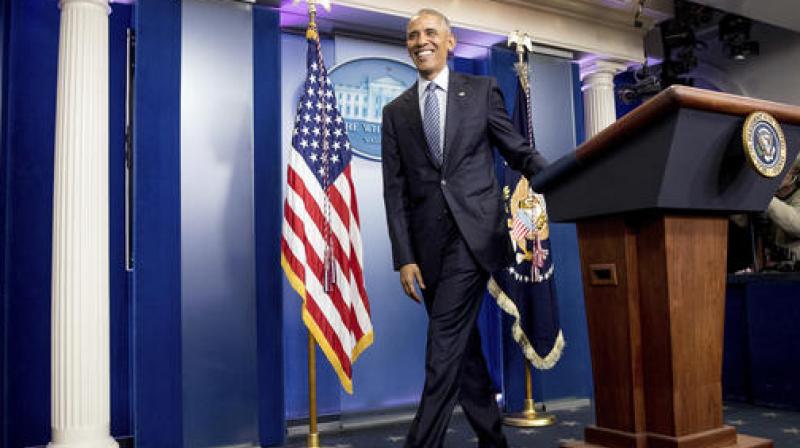 His two terms played out like a running chronicle of the trends of our times: slow-jamming the news with Jimmy Fallon, reading mean tweets with Jimmy Kimmel, filling out his NCAA basketball bracket on ESPN, cruising with Jerry Seinfeld on "Comedians in Cars Getting Coffee."

"I'm appreciably cooler than I was two minutes ago," Obama declared after taking the wheel of a 1963 Corvette Stingray with Seinfeld in 2015.

And, months before the end of his term, he delivered what could be his with-it farewell line as he ended his remarks at the correspondents' dinner by embracing a gesture popularised by rappers and comedians.

"Obama out," he deadpanned, as he dropped his microphone and left the lectern.

Michelle Obama matched the president on-trend moment for on-trend moment: She strapped on a seatbelt for "Carpool Karaoke" with James Corden, beat Ellen DeGeneres in a push-ups contest and rapped with a turnip.

There he was in Alaska, warning about the dangers of climate change on "Running Wild with Bear Grylls." There she was on the "Tonight Show," pushing exercise by challenging Fallon to a sack race in the East Room.

The president turned up on "Between Two Ferns with Zach Galifianakis" to get millennials to sign up for his health care law.

"OK, let's get this out of the way, what did you come here to plug?" Galifianakis groused.

"I think it's fair to say that I wouldn't be with you here today if I didn't have something to plug," Obama shot back. "Have you heard of the Affordable Care Act?"

Some conservatives called that appearance undignified. But within days, it had snagged 18 million views, on par with Justin Bieber. And health care signups ticked upward.

The president tossed a "Mad Men" reference into his 2014 State of the Union address calling out wage disparities between men and women and Twitter went wild.

For all the fascination with Obama's pop culture finesse, there was a downside.

Eric Dezenhall, a Washington crisis management consultant and former Reagan administration official, contends that Donald Trump's election "can be traced almost solely to the domination of the popular culture that Obama and Obama-ism had." Obama's cultural identity was intertwined with a liberal agenda that was a turnoff to many voters.

"A lot of Trump's supporters said, 'I'm tired of hearing about this,'" says Dezenhall. People "got sick and tired of hearing that Islam is a peace-loving religion and that there's nobody braver than Kaitlyn Jenner."

Of course Trump, too, is in large part a product of pop culture, with decades of movie cameo credits as a billionaire businessman and a long run as the Richie-Rich "Apprentice" boss.

"But he spoke more to the heartland, whereas Obama's success was very coastal," says Dezenhall.

The president's melding of policy and pop culture started early, when he promoted his economic stimulus plan to Jay Leno (remember him?) on NBC's "Tonight Show" in 2009.

Past presidents had done late-night shows, but only as candidates, not after they took office.

Think of Bill Clinton, in sunglasses, wailing "Heartbreak Hotel" on his sax on Arsenio Hall's show in 1992. Or Richard Nixon's labored "sock it to me" soundbite on "Laugh-In" in September 1968.

(It took six takes for Nixon to get the four-second quip right.)

George Schlatter, the show's creator, later said Nixon believed "appearing on 'Laugh-In' is what got him elected, and I believe that."

Obama caught flak for his Leno appearance, beneath the office, some said but he shrugged it off as just part of the needling that comes with the presidency.

"It's a little bit like 'American Idol,' except everyone is Simon Cowell," he said.

The nation wasn't always sure what to make of this oh-so-hip president. When candidate Obama and his wife shared an affectionate fist bump on stage during the presidential campaign, a Fox News anchor later referred to it as a possible "terrorist fist jab."

The benefits of Obama's affinity for pop culture were clear:

Hollywood's brightest stars stepped up to amplify his message and raise money for his causes.

"There also was a kind of reflective coolness" that rubbed off on the president, said Tevi Troy, a former Bush administration official who wrote a book about presidents and pop culture.

The president's cultural allusions worked for him, Troy says, because they were authentic. Obama watched more TV growing than up any other president, he said.

The same shtick didn't necessarily work for Hillary Clinton in her unsuccessful campaign to succeed him.

When Clinton turned up with Katy Perry or other pop stars, Troy says, "It seemed inauthentic. Nobody felt that she actually listened to their music."

Even Obama had his stumbles and may have taken it too far at times. His attempt to maximize the messages from his 2016 State of the Union address went pretty far afield when he found himself being questioned by YouTube personality "sWooZie" on the rapping skills of Drake vs. Kendrick Lamar. (Obama went with Lamar.)

And then there was his 2013 offhand reference to a "Jedi mind-meld." That was an inadvertent mashup of references to "Star Wars" and "Star Trek."