The tribe's skills are crucial for the production of anti-venom in a country with the world's highest number of deaths from snake bites. 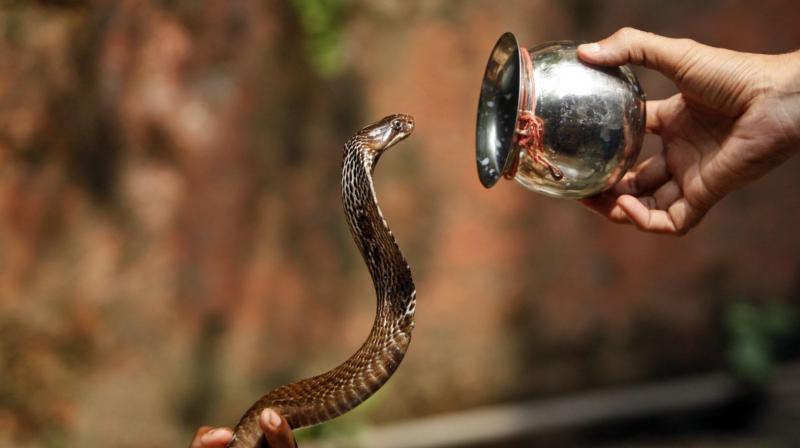 Since the 1970s, the Irula snake-catchers' cooperative on the outskirts of the southern city of Chennai has revolutionised the treatment of snake-bites in India (Photo: AP/Representational)

Chengalpattu: A small scythe, a crowbar and a bundle of canvas bags are all that Kali and Vedan carry when they venture into the fields of southern India to catch some of the world's deadliest snakes.

Their skills, passed from generation to generation of the Irula tribe they belong to, are crucial for the production of anti-venom in a country with the world's highest number of deaths from snake bites.

Since it began in the 1970s, the Irula snake-catchers' cooperative on the outskirts of the southern city of Chennai has revolutionised the treatment of snake-bites in India, enabling it to produce enough anti-venom to supply hospitals across the country.

It also provides much-needed income for the Irula, one of the region's most deprived groups, who used to hunt snakes and sell the skins but lost their livelihood overnight when India banned the practice in 1972.

Kali learned the intricate skill of tracking and then catching snakes from his father, whose abilities were renowned in the small community.

Now the 36-year-old uses those same skills to catch snakes for the cooperative, which keeps them for a month under licence from the government and harvests their venom before returning them to nature.

This month he is tasked with catching the saw-scaled and Russell's vipers -- two of India's four deadliest snake varieties -- under the quota system the cooperative uses to ensure it harvests the right quantity of venom.

Within 20 minutes of starting the search in rice fields less than a mile (kilometre) from a busy highway, he has spotted a tiny snake concealed under the bark of a fence post, its brown markings barely visible against the wood.

Minutes later his partner Vedan has expertly manoeuvred the slithering creature with his bare hands into a canvas bag, which he secures with a tight knot and slings into a plastic shopping basket.

"It's an adult female saw-scaled viper, one of the most venomous snakes," says Kali, who like many Indians goes by only one name.

"In winter they like to hide in tree bark, that's how we found it."

Sometimes he gets lucky and finds a snake quickly; other times he will go for days without a catch, but the money is good, and unlike him, Kali's children are able to attend school regularly.

The cooperative, which was set up by the American conservationist Rom Whitaker and is now controlled by the state authorities, will keep the snake for a month and harvest its venom four times.

Non-lethal amounts of venom from four snake species are injected into horses, which then produce antigens that are used to make antivenom for all bites.

That is the only reliable treatment for a human bitten by a venomous snake, although the Irula also use herbal treatments that they say give them more time to reach a hospital.

India has 244 snake species and the four most venomous, the cobra, krait, Russell's viper and saw-scaled viper, are found throughout the country.

Experts say thousands of people die every year from snakebites in India, still a predominately rural economy where farmers run the risk of being bitten every time they go into their fields.

Government figures show just a few recorded cases every year, but most go unreported because victims never reach hospital and a 2011 study put the number of annual deaths at around 46,000.

Villagers living near the cooperative said snakes frequently entered their homes, putting them at risk of being bitten in their sleep -- but were pretty nonchalant about the threat.

"In our village one person was bitten by a snake. He was taken to hospital and he recovered," said Maragadham, a 36-year-old child minder.

"Snakes are found in most homes, but they are not a threat to us."

That is because most health facilities in India now have sufficient supplies of anti-venom.

Back at the cooperative, Kali and Vedan have placed their catch in a clay pot in preparation for the extraction process.

The extractor takes out the snake, gripping it below the head, which he places in front of a thin piece of leather that has been stretched over the top of a small glass jar to imitate skin.

As the snake opens its jaw and sinks its fangs into the leather covering, the deadly liquid drips into the jar.

"The snake has to bite, only then will it inject the venom," explains R. Kumar after snipping a few scales from the snake's skin to indicate that extraction has taken place.

"We don't have much education. We're not interested in any other work. But this work is important, it is sacred to us."