“The Bakhshali manuscript [an Indian mathematical text written on birch bark that was found in 1881] is on display,” said Dinesh K Patnaik. 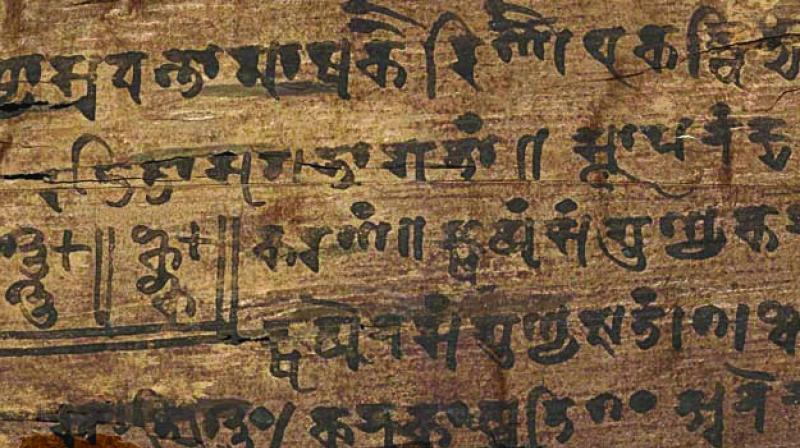 A section of the Bakhshali manuscript, from the Bodleian Library, University of Oxford.

London: The Science Museum in London has launched a new exhibition celebrating the long tradition of scientific thought in India, from the ancient past to the present day.

The exhibition “Illuminating India: 5000 years of science and innovation’, which opens its doors to the public on Wednesday, is among the highlights of the wider UK-India Year of Culture celebration this year.

It looks at India’s expertise in observation, calculation and innovation, emphasising the importance of science in India as a way of understanding the world and creating a better society.

“The significance of India’s contributions to the history of science, technology, engineering and mathematics cannot be overstated,” said Matt Kimberley, head of content for the exhibition at the museum.

“From the birth of the mathematical concept of zero over 1,500 years ago, to the lifesaving medical technologies of today designed on the principles of jugaad, India and its people have played a pivotal role in shaping the global narrative of the history of science,” Kimberley said.

Illuminating India tells stories ranging from the earliest feats of civil engineering achieved by the Indus Valley Civilisation 5,000 years ago to the interplanetary expeditions of the Indian Space Research Organisation today. It traces India’s achievements such as the Great Trigonometrical Survey, which established the precise curvature of the earth, how high mountains with clear skies enabled important advances in astronomy and solar physics.

“The Bakhshali manuscript [an Indian mathematical text written on birch bark that was found in 1881] is on display,” said Dinesh K Patnaik.