Novelist and ex-journalist promised to legalise gay marriage if given office. 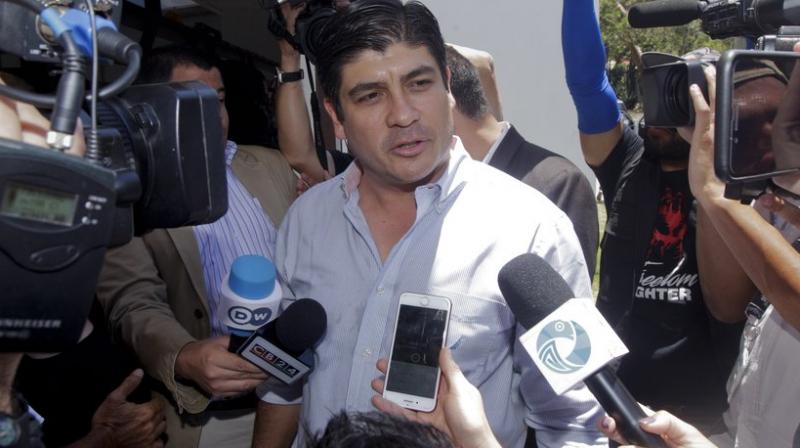 It was at university that he indulged his musical passion as the frontman of a band called Dramatika. (Photo: AP)

San Jose: Carlos Alvarado Quesada counts Ernest Hemingway and Pink Floyd among his guiding lights, but it was his experience as a former minister in Costa Rica's outgoing center-left government that shaped the political career that Sunday led to him becoming president-elect.

His time as labor minister made him a household name and gave him the credibility to triumph over his rival in the run-off, ultra-conservative evangelical preacher Fabricio Alvarado (no relation).

Promising continuity and a message of national unification in his deep voice, Carlos Alvarado managed to rally various political parties to his bid.

The 38-year-old former journalist and political analyst put his experience in public office to the fore, but his artistic merits as a thrice-published novelist and onetime singer in a progressive rock band helped color his profile.

The second child born to a middle-class family, Alvarado grew up to study journalism at the University of Costa Rica and married his high school girlfriend, with whom he has a son.

It was at university that he indulged his musical passion as the frontman of a band called Dramatika.

He told the Teletica channel in an interview that he decided to drop journalism after interviewing a woman in a poor neighborhood whose mentally troubled son had been murdered.

"I remember seeing this woman crying with such helplessness, and I was capturing this moment of inequality, of injustice. I was going to share this with a lot of people but without being able to change this inequality. That was the end of my life as a journalist, because I understood that one has to be involved to be change things," he said.

Alvarado studied political science at the University of Costa Rica and then got a scholarship to study development at Britain's University of Sussex.

When he returned to Costa Rica he married Claudia Dobles, an architect, and both then moved to Panama for her work.

In Panama, Alvarado wrote what he considered his best novel: "Las Posesiones" (The Possessions), about the confiscation of German and Italian properties in Costa Rica during World War II.

He returned to Costa Rica and joined the electoral campaign of Luis Guillermo Solis, the country's outgoing president who was constitutionally barred from seeking a second term, as communications coordinator.

When Solis won the president in 2014, Alvarado was named minister for social development. Two years later he was made labor minister, a post he left ahead of starting his tilt for the presidency.

As the candidate of Solis's Citizens' Action Party, Alvarado had to share the burden of a scandal of abuse of office and the government's inability to prevent a rise in violent crime.

But analysts said he managed to stay distant from the government, and was seen as someone able to renew the party.

"Carlos managed to keep independent from the government with quick actions, such as demanding resignations (from those involved in the scandal) and urging more forcefulness from the president. What's more, he has the profile of some young, able to turn around his party," said one analyst, Gustavo Araya, of the Latin American Social Sciences Faculty.

Nevertheless, the ruling party did not do so well in poorer zones of Costa Rica -- despite Alvarado helping to bring down poverty while he was development minister.