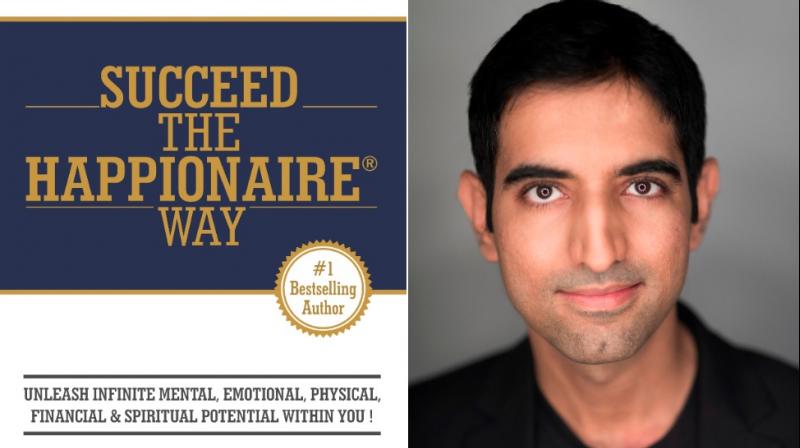 The book which describes the common habits of successful people also goes on to encourage everyone to recognize their untouched potential by promoting positive habits in life.

Success to Yogesh Chabria does not have a single definition. The author says that everyone has their own parameters to determine whether they have succeeded in life.

The book which describes the common habits of successful people also goes on to encourage everyone to recognize their untouched potential by promoting positive habits in life.

Talking to this correspondent Chabria revealed that Succeed the Happionaire Way is a book meant for everyone who wants to improve themselves, overcome their fears and achieve their goals.

Elaborating upon his motivation behind writing the book Chabria said that he has always been fascinated and curious to know what differentiates people who succeed from those who don’t.

He went on to add that he has realized, that while the desires of each individual are different – the patterns and strategies are similar.

“If anyone models and learns these patterns they can truly achieve their goals by really crushing fear and anxiety,” he explained.

Reminiscing on what led him to write the book, Chabria said that his life journey has seen him selling toys at the age of 5 to being a overweight, lonely and depressed youngster to someone who, around the same time discovered that Geeta and was able to change his entire life around. He wanted to share how he succeeded with the world, so that others too may follow similar paths.

“I wanted to share the strategies, tools, secrets and actions I took to do this,” Chabria said, adding, “For people to benefit knowledge is not enough – action is what is important. Succeed The Happionaire Way is a book for everyone and is written in a simple and entertaining way, so much so that many people who never read, have picked it up.”

Happiness to the author is an inner state where one is completely at peace with the self.

Drawing a parallel between happiness and sorrow, the author revealed that he knows a number of people who have everything in life and are yet shackled by unhappiness and at the same time there are those he knows who are perhaps a little less privileged and are yet happy and content, who even when faced with the most difficult situations are “happy deep inside.”

While Chabria may have found success as a motivational speaker, he is loathe to think of himself as one. Defining himself as someone who likes to “bring in change,” he revealed that the desire to create a difference was embedded in him ever since he was a child. “I like bringing in change by first asking questions that truly matter and then discovering answers,” he said.

While Chabria defined that success only comes to people who have a desire and hunger to learn more, the young motivational speaker elaborated that the mantra for success in life stems from being true to oneself and following what the heart says.

“Your heart connects to your deepest desires, if you are true to your goals and put in massive action, nothing is impossible. I speak from my own experience,” said Chabria, adding that with the book, his target is to spread the message of happiness and success to at least 100 million people in 2018.

According to Chabria the book is a complete roadmap that has benefited numerous people who have followed it and have helped them in their professional life, with their finances, relationship and health.