A Forest Department official told PTI that the crocodile was released in a nearby lake which is home to many crocodiles. 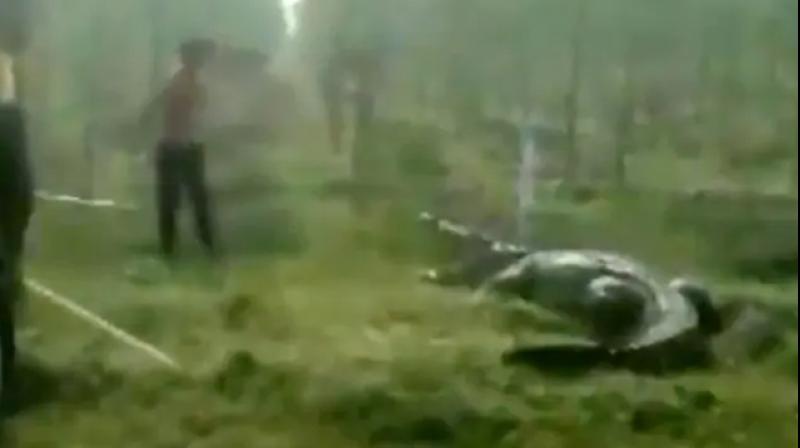 A 12-feet-long crocodile which had ventured into the fields in a village of Vadodara was rescued on Sunday. (Photo: screenshot/ ANI)

Vadodra: A 12-feet-long crocodile which had ventured into the fields in a village of Vadodara was rescued on Sunday. The massive crocodile was handed over to the Forest Department after the rescue operation, which took over five hours.

The reptile had come from the Narmada canal solar plant station located in Raval village. Villagers use this canal to water their land.

"The engineer of the solar plant station of Narmada canal informed us at 10:30 AM about the presence of 12-feet long crocodile in Raval village. It took us five-six hours to rescue the crocodile," said Hemant Wadhwana, wildlife rescuer to ANI.

The sight of the huge crocodile created a ruckus among the villagers. They informed the Wildlife Rescue Centre, who arrived to capture it. Wildlife rescuers had to face a lot of difficulty in taming the reptile. A video shows them during the rescue operation:

#WATCH Gujarat: A 12-feet-long crocodile which had ventured out into fields in Raval village of Vadodara, yesterday, was rescued and handed over to forest department. pic.twitter.com/TOiVuqjXFv

A Forest Department official told PTI that the crocodile was released in a nearby lake which is home to many crocodiles. He added that it was the third such incident in the same locality in the last one year.