The Rajkumar Hirani directorial has a record-breaking figure for Sunday, and total stands at Rs 120. 06 crores. 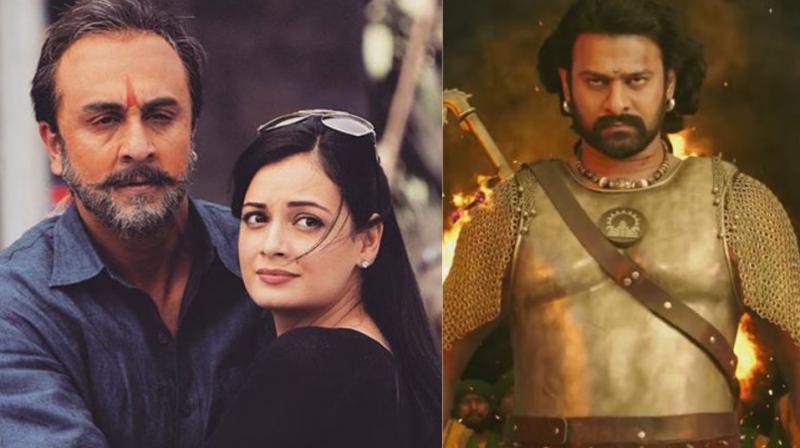 Stills from ‘Sanju’ and ‘Baahubali: The Conclusion.’

Mumbai: The Khan league, dominated by Shah Rukh, Salman and Aamir, all these years, is having new entrants now.

After Shahid Kapoor, Ranveer Singh’s ‘Padmaavat’ touched the Rs 100-crore mark in the first weekend itself, Ranbir Kapoor has done the Khan-esque feat at the box office.

However, Ranbir’s ‘Sanju’ has not just beaten the Sanjay Leela Bhansali directorial by a considerable margin, but also has taken just three days to hit a century as compared to the period drama’s five-day extended weekend.

After taking the highest first day and second day collections of the year, totalling more than Rs 73 crores, ‘Sanju’ did the unthinkable on Sunday, collecting Rs 46.71 on Sunday.

The figure is the highest collections on a single day for a Bollywood film, and it even went on to beat by a whisker, Hindi version tally of Telugu drama ‘Baahubali: The Conclusion,’ which was Rs 46.50 crores.

It has even beaten another Salman film ‘Tiger Zinda Hai’, which had minted Rs 114 crores.

However, ‘Sanju’ is behind his other films like ‘Prem Ratan Dhan Payo’ and ‘Sultan’, and also ‘Baahubali 2’ in the list of highest opening weekend collections.

Will the Rajkumar Hirani directorial beat Aamir's ‘Dangal’ to become the first Bollywood film to gross over Rs 400 crores at the domestic market? Makers will surely keep their fingers crossed.