From South Korean president to prisoner 503, Park in jail 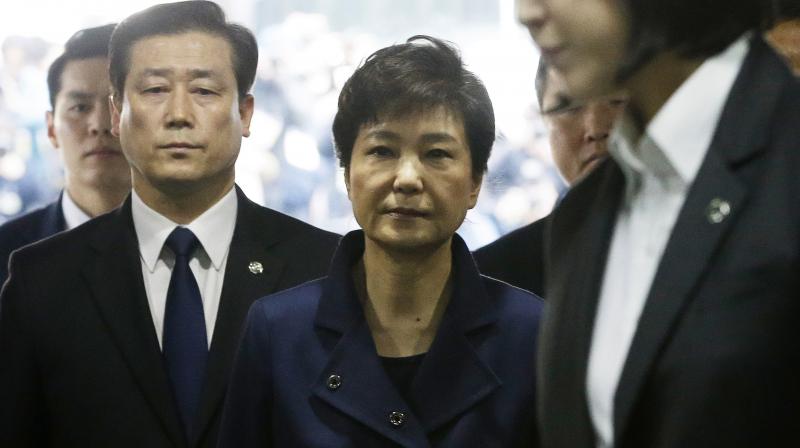 South Korea's ousted leader Park Geun-hye arrives at the Seoul Central District Court for hearing on a prosecutors' request for her arrest for corruption. (Photo: AP)

Seoul: Ousted South Korean president Park Geun-Hye is now just prisoner 503, incarcerated in a spartan cell while prosecutors decide whether to indict her over a corruption scandal that precipitated her fall from grace.

The former head of state spent her first night in solitary confinement at Seoul Detention Centre after a court Friday ordered her to be held pending charges.

She had her mugshot taken and was given a prison kit including toiletries, a meal tray and a quilt, reports said.

After being processed like any other prisoner, Park, 65, was assigned a 10.6 square metre solitary cell, larger than the average 6.5 square metre cell, Yonhap news agency said.

"After taking a bath, she changed into green-coloured winter-season prison garb" an official of the Justice Ministry was quoted as saying by the Joongang Ilbo daily.

The chest of Park's uniform was emblazoned with her prison number -- 503 -- by which she will be known during her incarceration.

Prosecutors have yet to specify the formal charges against her, but have previously said she is suspected of bribery, abuse of authority, coercion, and leaking government secrets.

They plan to resume questioning her early next week, most likely by visiting her in the prison instead of summoning her to their office, Yonhap said.

Prosecutors have until April 19 to question Park before they indict her.

Park secured the largest vote share of any candidate in the democratic era when she was elected in 2012. But she was impeached by parliament in December, as the scandal combined with mounting economic and social frustrations to trigger huge candlelit demonstrations. The Constitutional Court later upheld the decision.

Park, the daughter of late dictator Park Chung-Hee, is the third former leader to be arrested over corruption in Asia's fourth-largest economy, where politics and big business have long been closely tied.

If eventually found guilty, she would face at least 10 years in prison, legal experts said.