Artist tries to hatch eggs like hen with body heat 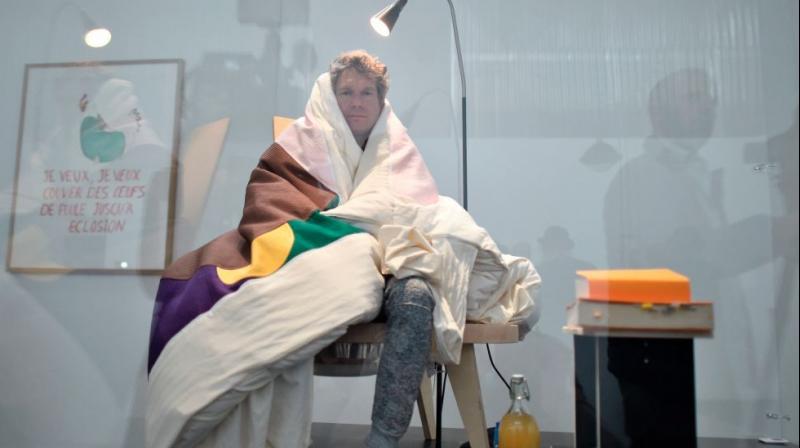 The artist has used an insulating blanket designed by Korean artist Seglui Lee that will help him maintain the right temperature directly over the eggs. (Photo: AFP)

French artist Abraham Poincheval, who famously spent two weeks inside a bear sculpture and a week inside a rock, began his latest feat on Wednesday - hatching eggs.

The 44-year-old, who specialises in performance art, will mimic a mother hen by incubating 10 eggs with his own body heat inside a glass vivarium until they hatch.He reckons the endeavour will take from 21-26 days."I will, broadly speaking, become a chicken," Poincheval said last month.

Poincheval says he seeks to explore varying concepts of time for different species and natural objects in his performances. The best way to understand objects is not from a distance but by entering them, he says. In his latest experiment, Poincheval sits on a chair with the eggs in a container fixed under the seat.

He calculates that the heat from his body - kept high by him being wrapped in a thick, insulating blanket designed by Korean artist Seglui Lee - will maintain the right temperature directly over the eggs. He will eat certain foods such as ginger to raise his body temperature.He will be able to stand up and leave his place over the eggs for no more than 30 minutes a day to receive meals that will be brought to him.

For his own calls of nature he will use a box beneath him, though he will not be able to get up to relieve himself.This is the first time in his explorations that Poincheval confronts the world of the living.

Last month, he spent a week in a body-shaped slot carved out from a limestone rock in the same contemporary art museum in Paris, eating stewed fruit, soups and purees.Before that, he had spent a fortnight living inside a hollowed-out bear sculpture in Paris's Museum of Hunting and Nature in April 2014, eating worms and beetles to mirror a bear's diet.