The varsity had to even resort to ask law professionals to correct papers in a bid to complete assessment on time. 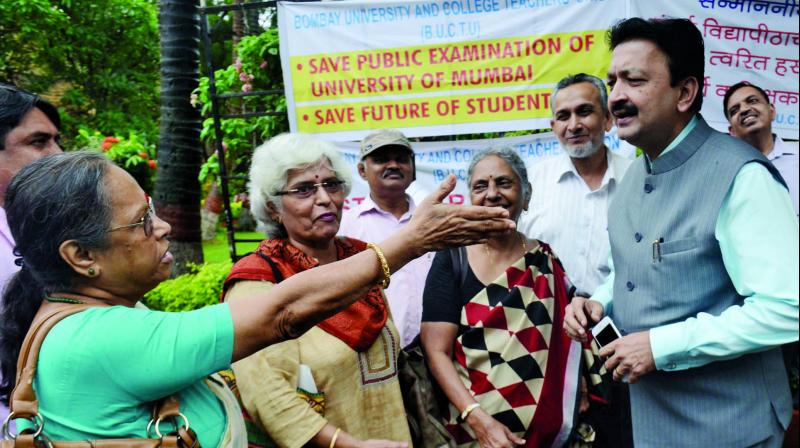 University of MumbaiTeachers protest against the MU administration’s decison to use online assessment system.

While the results of the University of Mumbai (MU) students are supposed to be declared in a span of 30 days or a maximum of 45 days, this year all the records were broken.

The results of the final year students of MU, who appeared for their summer term examination in the month of April and May got their results in the month of September — four months late, much to the annoyance and sufferings of the students.

It all started reportedly with the ex-vice chancellor of MU, Dr Sanjay Deshmukh announcing that all the papers will be assessed in a new online system called the on-screen marking (OSM) in the month of May without running a pilot or any pre-assessment preparations like training teachers and staff to use the new system.

Furthermore, there was lack of coordination between the varsity and the private company MertiTrac, which made the software, which was used for the assessment.

Along with the delay, other issues too cropped up — there were Internet and technical issues in the system that made it difficult for scanning some papers and some answer sheets even went missing.

In case of students applying to universities abroad, help desk was constituted at the varsity’s Fort campus to make it easier to help them complete documentation.

The varsity had to even resort to ask law professionals to correct papers in a bid to complete assessment on time.

There were also reports of poor payment and pressure on assessors. Finally, in October, Dr Deshmukh was sacked and Dr Devanand Shinde was brought in as the acting vice chancellor.

However, in the end, the varsity continued to maintain their contract with MeritTrac for the assessment of the winter examinations held in November and December, with a promise, to students, teachers and even the high court, that this time around, things would go smoothly.

Rresistance by Stakeholders
Multiple cases were also filed by students in the high court, demanding their results to be declared soon, to be given aggregate marks for missing answer sheets and to be eligible for admissions for higher studies, despite missing deadlines. Many instances of protests by students, teachers and parents, being held outside the university gates as well inside the university campus were witnessed.