In a lighter moment, when a questioner asked Sophia if she would marry him, she replied, “I will politely decline the proposal. 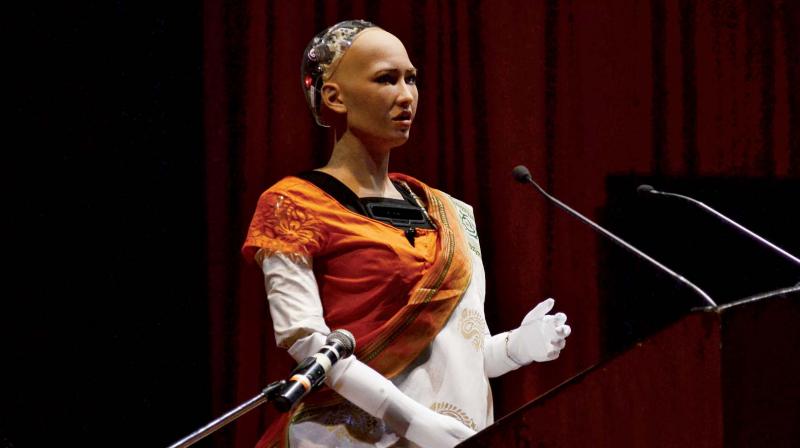 Mumbai: Making her first appearance in India, ‘Sophia’, the first robot citizen of Saudi Arabia, graced the Indian Institute of Technology-Bombay’s (IIT-B) annual Techfest with her presence on Saturday. The saree-clad android, who greeted students with a namaste, is a social-human robot i.e. she can recognise people, make around 50 facial expressions, talk, respond to queries and make eye contact — unlike the rest of her ilk.

The interaction was in keeping with the theme of the festival: Technology and Artificial Intelligence (AI).  When asked by an onlooker to list the languages she speaks, Sophia replied with a frown, “I am just two years old, so till now I only know English and Chinese; but in some years I will be able to speak all languages.”

In a lighter moment, when a questioner asked Sophia if she would marry him, she replied, “I will politely decline the proposal.

Thank you for the compliment though.” Talking about how she feels to be in India,and especially at IIT-B, she said, “I have heard so many things about the traditions and the culture of the country that I am really happy to be here. India is like a technological superpower and has made huge investments in space and technology.”

On IIT-B, she continued, “It’s good to be around 3,015 people and I am looking forward to have a conversation with the students of IIT-B.”

Shedding light on AI to the students, Sophia went on to state that intelligence displayed by machines is the future of technology and it will let humans and robots co-exit with mutual understanding.

The largely successful interaction was marred by one hiccup: the humanoid robot malfunctioned for 10 minutes because of a weak Internet connection on the part of the institute. IIT-B managers blamed the Internet issue on the lack of a proper connection. However, after troubleshooting, Sophia sprang to life once again.

Sophia was created by Hanson Robotics Limited, a Hong Kong-based company, in 2015 and has been granted citizenship by the West Asian country, which makes her the first robot in the world to hold a citizenship. What sets apart Sophia from other humanoid robots is her ability to recognise people’s faces, eyes and voices — a feat enabled by cameras and software.