All entry, exit points in country alerted to detain trio on sight. 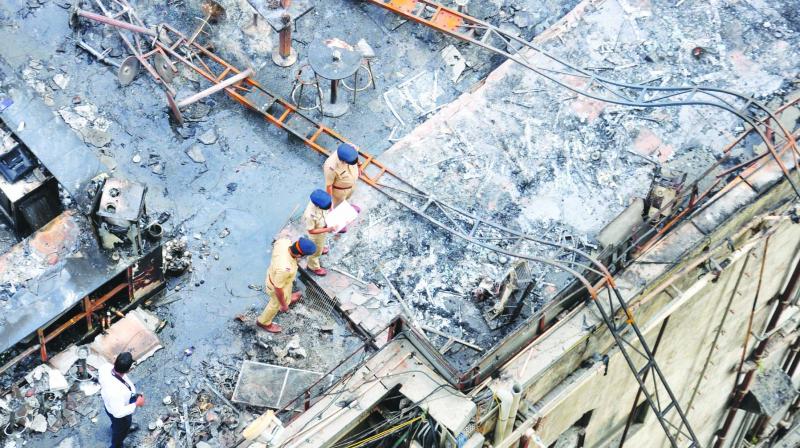 Police officers inspecting the ruins of the building, which was burnt due to the fire.

Mumbai: The Mumbai police has issued a lookout notice against the three co-owners of the pub 1 Above at Lower Parel’s Kamala Mills compound, which was among the two pubs gutted in an early Friday fire that killed 14 persons. The trio — Ritesh Sanghvi, Jigar Sanghvi and Abhijeet Mankar — have been absconding since the tragedy. All exit-entry points across the country have been alerted to detain the trio upon being sighted.

The NM Joshi police had on Friday detained two close relatives of the Sanghvis for questioning. An FIR has been registered against the Sanghvi brothers and Mankar under sections related to culpable homicide not amounting to murder and other sections. No arrest has been made yet.

Police sources said that on Friday they had detained two close relatives of the Sanghvi brothers with the hope that since the relatives were in the clutches of the police, the Sanghvi brothers might surrender themselves. The detention comes after neither the Sanghvi brothers nor Abhijeet Mankar were found to be at their residences in South Mumbai. The police have also issued lookout notices against the three accused, for compromising on the safety norms set by the fire department of the Brihanmumbai Municipal Corporation (BMC).

S. Jayakumar, additional commissioner of police (central region) told this paper, “One very obvious violation was that the emergency exit on the floor was shut. There can be no violation bigger than this.”

“Acting on the BMC’s report which will be submitted to us, we will make the needed changes in the sections charged on the accused,” he added.