It’s not a crime syndicate: Court

No material to prove that Abhinav Bharat existed before 2006-2007. 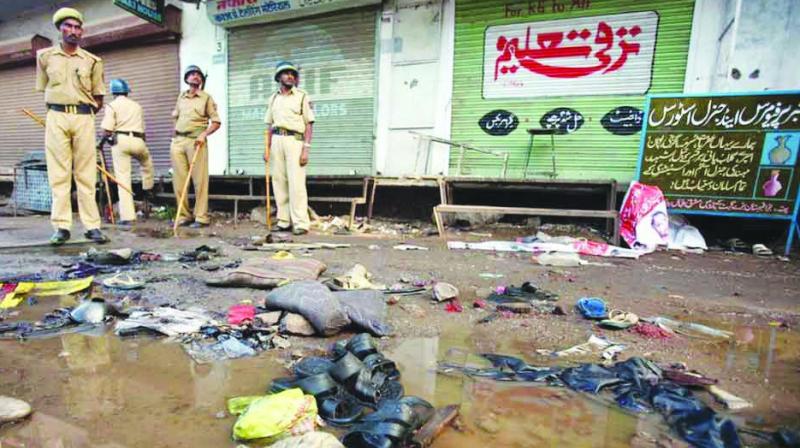 Mumbai: The special NIA court, while deciding the discharge-applications of accused in the 2008 Malegaon blast case, held that there is no material to show that Abhinav Bharat, the organisation floated by Malegaon blast case accused, was in existence in 2003-04 and it came into existence only in 2006-07.

According to the judge, there is no proof that Rakesh Dhawde, who was also accused in the Parbhani and Jalna blasts, had any connection with present accused or Abhinav Bharat was an organised crime syndicate, and hence the court dropped MCOCA from the case.

According to judge ATS alleged that involvement of Rakesh Dhawde in Parbhani and Jalna case was as a member of or on behalf of an organised crime syndicate i.e. Abhinav Bharat, but there is no evidence on record to prove it.

“There is no material on record to show that prior to 2006-07, Dhawde had any connection with present accused or he was working on their behalf,” the judge said.

The judge further said that in such circumstances it cannot be said that accused persons, including Dhawde committed the act in Parbhani and Jalna as a member of Abhinav Bharat. Moreover, immediate filing of supplementary chargesheets against Dhawde in Parbhani and Jalna case after his arrest in this case speaks volumes,” said the judge while dropping MCOCA from the case.

Subsequent Conduct
The NIA court also rejected defence’s argument that intercepted telephonic conversation between Col Prasad Purohit and retired Major Ramesh Upadhyay cannot be considered because said conversation is after the blast and conspiracy ends once it’s achieved. The judge accepted special public prosecutor Avinash Rasal’s argument that conspiracy was not over because accused had conspired to establish ‘Hindu Rashtra’ and blast was one step towards this object. According to the judge this conversation can be considered as a subsequent conduct of the accused.