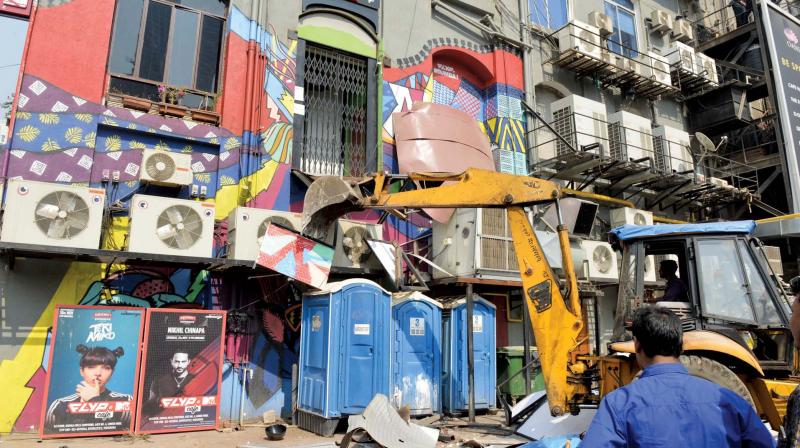 The BMC went on a massive demolition spree to remove illegal constructions and encroachments at malls, pubs, restaurants and gymkhanas across the city.

Mumbai: It took the loss of 14 lives in Friday’s fire for the Brihanmumbai Municipal Corporation (BMC) to sit up and initiate action against irregularities and encroachments at various restaurants and other establishments in the city. Facing huge flak after the Kamala Mills compound fire, the BMC went on a massive demolition spree to remove illegal constructions and encroachments at malls, pubs, restaurants and gymkhanas across the city on Saturday. In a single day, the civic body took action on as many as 314 places and razed nearly 300 illegal structures. The drive will continue on Sunday, said officials.

According to civic officials, the civic body also sealed seven restaurants, Sagar, 38 Feast, Mini Punjab and Sams Kitchen at Jogeshwari-Vikhroli Link Road and Flamingo and Sai Kitchen Hotel at Chembur. In addition, the BMC sealed 9,000 sq ft terrace of Sheesha Sky Lounge at Andheri, by demolishing an illegal construction erected on the top. The BMC also seized 417 gas cylinders during the drive.

“We found several irregularities like rooftop sheds, open space encroachment, illegal constructions, encroachment on common passage at these places during the drive. After demolition, the restaurants, hotels and malls have been warned that they should comply with fire safety norms strictly or face action,” said a senior civic official.

The restaurants have been sealed as they were found violating the health department and fire safety norms. It was also found that they had made illegal additions and alterations to their premises endangering the safety of people in case of a fire hazard. They have been asked to obtain fresh no-objection certificates, he added.

Three special teams were formed in each of the 24 administrative wards to carry out the demolition drive. All top officials, including additional commissioners Abasaheb Jarhad, Vijay Singhal and IA Kundan, hit the roads supervising the drive.

“As per BMC’s directives, we are taking precautions to ensure that there is no danger to our patrons,” said Mr Shaikh from Khyber restaurant.

Ativists have slammed the BMC, saying it took 14 lives for them to wake up to the menace of encroachments. “Such huge numbers of encroachments removed in a single day means civic officials were turning a blind eye towards them so far,” said civic activist Nikhil Desai from Matunga.

Meanwhile, the 1 Above has reiterated its stand that the fire emanated from the adjoining Mojo’s Bristo pub and not from its premises.