NCP will explore options only if BJP fails floor test 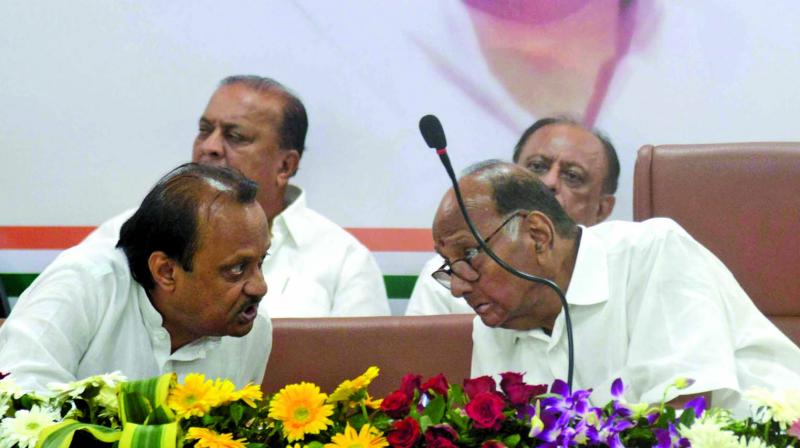 Mumbai NCP president and chief spokesperson Nawab Malik said, “If the BJP fails to pass the floor test in the state Legislative Assembly and its government collapses, the NCP will then contemplate other alternatives to form the government.”

Meanwhile, former deputy chief minister and senior NCP leader Ajit Pawar is all set to become the Leader of Opposition in the state Legislative Assembly.

Ajit was unanimously elected as the NCP’s group leader of the state Legislature at a meeting. Mr Patil proposed Ajit’s name and was seconded by Mr Malik, Dhananjay Munde, Jitendra Awhad, Hasan Musrif and Anil Deshmukh.

Speaking to the reporters, Ajit said that the NCP would point out the mistakes committed by the government. “We will keep tabs if the government is working in the right direction. We will ensure that there is no injustice meted out to any section of the society on the government’s watch,” Ajit said.

The Congress, meanwhile, ruled out any possibility of aligning with the Shiv Sena in forming the next government in Maharashtra.

Interestingly, former chief minister and senior leader Prithviraj Chavan had said that the Congress will “consider” any “concrete” proposal on government formation from the Sena. Talking to reporters, AICC general secretary incharge of Maharashtra Mallikarjun Kharge on Wednesday said there was no question of aligning with the Sena in government formation. "The mandate for the Congress is to function as an opposition party," he said.

Since the announcement of the Assembly election results, both the NCP and Congress have maintained that the public has asked them to sit in the Opposition and they will fulfil that duty.

With 54 seats, the NCP emerged the principal Opposition party in the recently concluded Assembly elections.