Deadline extension: Bid by BJP to score points over Sena

The Sena had asked the Brihanmumbai Municipal Corporation to extend the deadline for filing applications from August 31 to September 2. 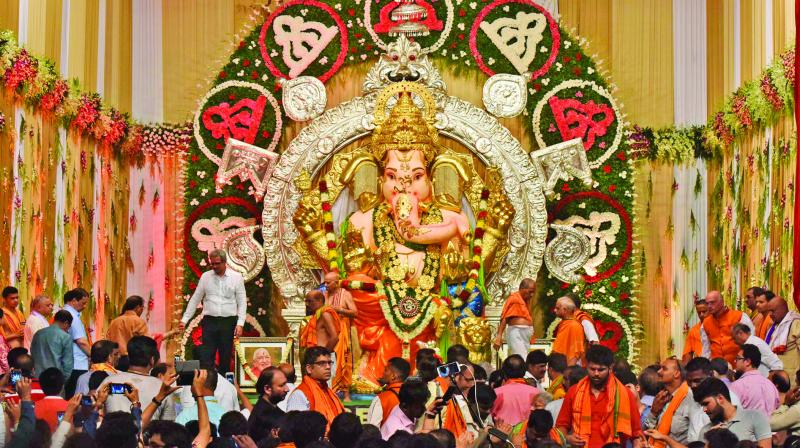 For last few years, the BJP has been trying vehemently to break the Sena stronghold over the city’s Ganesh mandals.

Mumbai: The move to extend the deadline for filing applications seeking permission to erect pandals for Ganeshotsav, is being seen as yet another attempt by the Bharatiya Janata Party (BJP) to score points over the Shiv Sena, which has a stronghold over the city’s Ganesh mandals.

The Sena had asked the Brihanmumbai Municipal Corporation to extend the deadline for filing applications from August 31 to September 2. But over the last couple of days, BJP MLA Ashish Shelar met chief minister Devendra Fadnavis and succeeded in getting the deadline extended by another three days.

For last few years, the BJP has been trying vehemently to break the Sena stronghold over the city’s Ganesh mandals. It was instrumental in forming a separate coordination committee of Ganesh mandals.

In the meeting with the CM, several important issues plaguing the Ganesh mandals were raised and the CM promised to look into their grievances and solve their problems.

The offences filed against mandal members while celebrating Gaheshotsav was one of the major issues faced by mandals. They also asked for an extension in deadline for playing loudspeakers till midnight during the festival from four days to five as well as permission to host cultural and religious programmes in pandals after 10 pm sans loudspeakers.

“The CM has assured that all offences against Ganesh mandal members would be withdrawn. Instructions will be issued regarding this,” said Mr Shelar.  “The city Ganesh mandals do not belong to any political party. But if someone is taking an initiative to solve our problems, we will definitely welcome it,” said a Ganesh Mandal member.