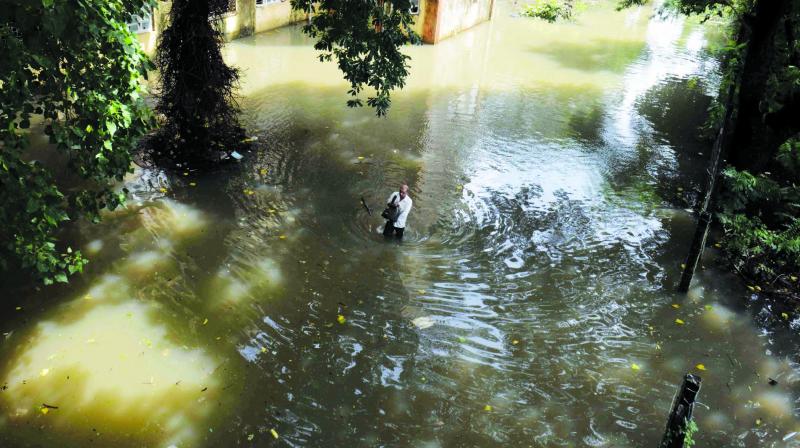 Mumbai: At least seven persons died including a two-year-old girl and six others were injured in Tuesday’s downpour. One of the deceased identified as Priyen (30), a lawyer by profession, was found lying unconscious inside his Santro car near Gandhi market Wednesday afternoon. At least seven others, including a renowned gastroenterologist attached to Bombay Hospital, went missing during flooding and are feared dead.

The gastroenterologist Dr Deepak Amrapurkar, is suspected to have fallen into an open manhole at Lower Parel after he abandoned his car and decided to walk near the Elphinstone Road railway station on Tuesday.

He was carrying an umbrella with him which was later found near the manhole. The police has registered a missing person’s complaint, and the fire brigade has launched a search operation for Dr Amrapurkar.

One of the deceased, a 30-year-old man, identified as Priyen, a lawyer by profession, was found lying unconscious inside his Santro car near Gandhi Market on Wednesday afternoon. Priyen was rushed to the civic-run Sion Hospital by the police after locals alerted them but he was declared dead on arrival.  Priyesh is suspected to have died due to suffocation in the car. The Sion police has registered an Accidental Death Report and is investigating the case.

Mumbai police’s control room received over 270 complaints of tree fall and 70 other distress calls from people, which were directed to the local police stations and help was sent.

In Vikhroli’s Parksite area, a wall collapsed on Tuesday evening killing 2-year-old Kalyani Jangam. It has come to the fore that the wall was in bad condition and the local corporator had warned the occupants to repair it. Kalyani’s parents Gopal (36) and Chhaya (30) were injured in the incident. They are undergoing treatment at the Rajawadi Hospital.

The house was located on the slope of a hill in Varsha Nagar, and the incident is suspected to be the aftermath of a possible landslide. The Parksite police registered an accidental death report (ADR) and is probing the matter further.

In another incident locals found a dead body of a 32-year-old Powai resident, Dilip Kumar Jha, floating in the Powai Lake on Wednesday afternoon. The police suspect that Jha, a resident of Filter Pada, allegedly slipped and drowned in the lake. Jha was taken to Rajawadi Hospital, where he was declared dead.