The crackdown came in the backdrop of a brutal attack on ANC officers by group of peddlers. 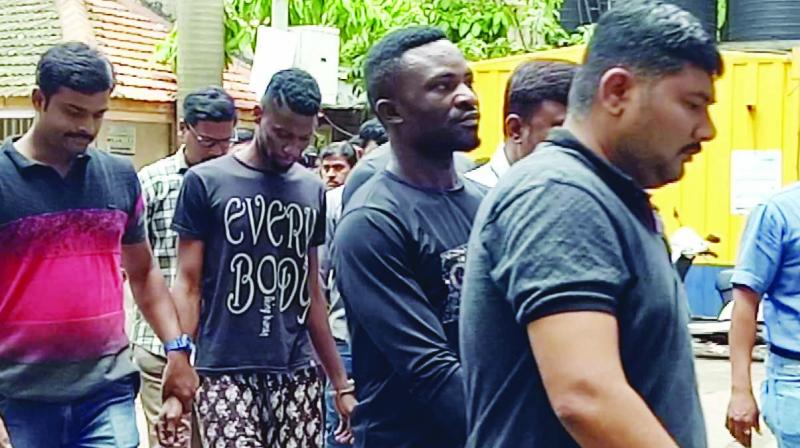 A few peddlers arrested being brought to court.

Mumbai: Drug peddlers of African origin have shifted their usual mode of transport, which was taxis to train rides, according to officers of Mumbai crime branch's Anti Narcotics Cell (ANC). Peddlers do not have fixed cabbies after the ANC arrested two such taxi drivers in the past for ferrying them to and fro from Mumbai to their temporary residences at the outskirts of the city.

The ANC had conducted a crackdown on peddlers who traded cocaine and mephedrone in Wadi Bunder area, early on Saturday. At least 18 persons were arrested in 2017 for peddling drugs on the stretch from Wadi Bunder and Khada Parsi in Byculla by the ANC.

The change in the modus operandi of the accused peddlers has been noticed recently after the railway police stepped up their efforts to curb peddling by upping vigilance, mostly in railway yards, where peddlers stay put. The peddlers then started travelling by taxis, ANC officials said.

“They travel to the spot using different routes and alight at different spots between Wadi Bumder and Khada Parsi statue. We have been focusing on this stretch and have been catching as many people as possible,” said Shivdeep Lande, deputy commissioner of police, (ANC).

The ANC had arrested 33 persons in 2017 among which 18 alone were apprehended by the Azad Maidan ANC in whose jurisdiction the Wadi Bunder area falls. The ANC has nabbed as many as 15 peddlers of African origin this year. The integrated efforts of the ANC with other agencies will be strengthened. The arrested accused persons so far are Charles Ijia, 27, Okoro Aja, 38, Mascells Dino, 32, Samuel Okeni, 30, Ken Kon Ishmel, 37, Kofi Romalik, 30, Chikku Fry, 43, Nanna Agvu, 28, Joku Vachuku Pais, 32 were remanded in police custody in the case on Monday.

The officials had seized cocaine and mephedrone worth `5.38 lakh from them. None of the accused were carrying passports, while two of them were armed with knives.

The crackdown came in the backdrop of a brutal attack on a team of ANC officers by group of peddlers in Wadi Bunder.