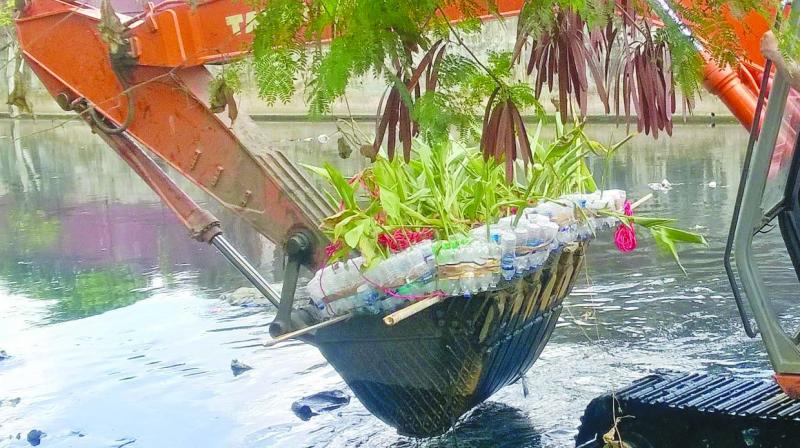 The pilot project will be implemented in the Poisar river.

Mumbai: A non-governmental orga-nisation (NGO) in partnership with the Brihan-mumbai Municipal Corpo-ration (BMC), has initiated a scheme to clean the city’s polluted rivers beginning August. River March, the NGO, will use a technique called ‘Floating Island’ to cleanse polluted rivers with the help of aquatic plants that absorb pollutants and also act as fodder for aquatic species.

The technique, which will use Canna Indica and Vetiver aquatic plants, will be implemented as a pilot-project first in Kandivali’s Poisar river from August, for which BMC will provide manpower.

According to a report compiled by independent body Environmental Policy and Research India (EPRI) over 2014-15, the Poisar river is polluted over 100 times the safety limit.

The group already experimented by releasing one floating island measuring 5 feet. 15 metres, on the Poisar river stretch last week. As it was only an experiment, old plastic bottles were used as the base.

“BMC liked the initiative and has promised to support if the plan is proven sustainable. They will give the manpower, but funds will have to arrange,” said Mr Jhaveri.

In the month of August, River March along with Let’s Green foundation, another NGO, will release the floating islands on a 2-km stretch of Poisar river. This time, long rolls of plastic sheets need to be utilised to form a base, increasing the cost. “The project can be completed on CSR (Corporate Social Responsibility) basis as the civic body will not bear the cost,” said Sabhajeet Mukherjee, founder of Let’s Green foundation.