The MNS also offered greetings to film star Urmila Matondkar, who is contesting from the north Mumbai seat after joining the Congress. 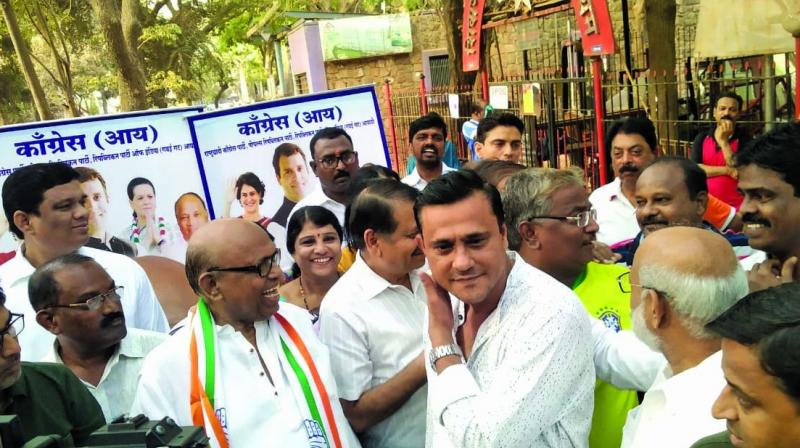 Mumbai: Eyebrows were raised in political circles after activists from the Maharashtra Navnirman Sena (MNS) were seen campaigning for Congress candidate Eknath Gaikwad, who is contesting from the south central Mumbai seat in the upcoming Lok Sabha polls.

Despite insistence from the NCP, the Congress had opposed the entry of MNS into the grand alliance of opposition parties for the LS polls.

Prominent MNS leader Sandeep Deshpande join-ed the campaign at Shivaji Park and urged the people to cast their vote in favour of Mr Gaiwad.

Speaking to the Asian Age, Mr Deshpande said, “I came across Mr Gaikwad’s campaign, while I was going for a daily morning walk. I wished him luck saying that democracy should survive at the expense of dictatorship.”

The Mumbai south central seat has been a Shiv Sena stronghold with the party having captured and kept it from 1991 to 2004. In the 2009 Lok Sabha polls, the Congress had won from the constituency, but in 2014, the Sena again trumped the Congress.

MNS chief Raj Thackeray, at a public rally in last week, said that his party would not contest the Lok Sabha polls but would support parties willing to defeat Prime Minister Narendra Modi.

With this announcement, the MNS had made its intentions clear to oppose the Sena-BJP candidates, though the party had decided not to contest the Lok Sabha polls.

The MNS also offered greetings to film star Urmila Matondkar, who is contesting from the north Mumbai seat after joining the Congress.