The coastal project will destroy our fishing grounds where we have been fishing since decades. 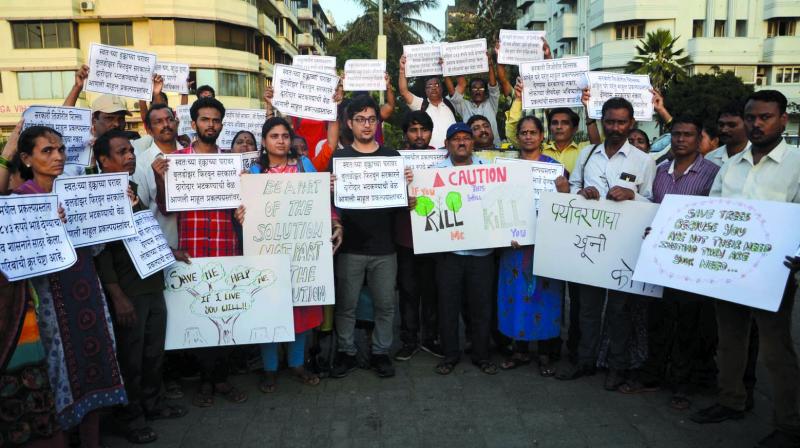 Mumbai: In a strong demonstration, a thousand citizens and activists gathered at Marine Drive Saturday to raise concerns over the city’s environment. Citizens including several children and senior citizens formed a symbolic human chain to create awareness about and urge political parties for a green manifesto ahead of the Lok Sabha elections. The issues ranged from loss of green spaces, development projects affecting wetlands and mangroves, displacement of tribals and fishermen, to wildlife protection among others.

Along with citizens, 25 environment groups participated in the human chain which stretched at least for 1 km at the Marine Drive promenade. Among the participants were Warli fishermen who stated that they had been directly affected by the coastal road project. “The coastal project will destroy our fishing grounds where we have been fishing since decades. When the political parties say that the coastal road is their dream project, they are not considering the fishing communities that have been the original inhabitants of Mumbai. They are telling us to fish outside the four nautical miles of our fishing areas where we don’t get commercial fish,” said Nitesh Patil, a Warli fisherman.

Meanwhile some people also stated that the development projects had been destroying the tree cover drastically. Vinod Jain, an activist who had travelled for the event from Pune stated, “My demonstration is a way to plead with international agencies that have been providing loans for projects like the Bullet Train, Metro 3 due to which many trees are being axed. As per my RTI query, as many as 20 lakh trees have been cut for the national highway in eight years across the country.”

Shailesh Shah, a 55-year-old resident from Kanjurmarg, said that he wanted to urge political leaders to stress on the environmental aspects of development projects. “All the political parties have disappointed us for their greed, but still, there are political individuals that can help us prioritise environment protection in Mumbai,” he said.

Tribals from Aarey Colony also voiced their concerns over the Metro car shed coming at the site.