The Shiv Sena chief said that whatever happened in the last five years between the Sena and the BJP is past now. 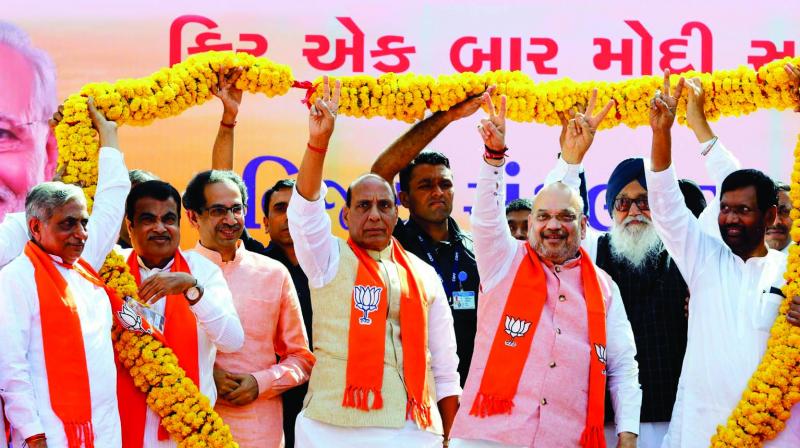 Mumbai: Shiv Sena chief Uddhav Thackeray on Saturday addressed a rally in Gujarat ahead of filing nomination of Bharatiya Janata Party (BJP) chief Amit Shah for the Gandhinagar Lok Sabha seat. Mr Thackeray said that although there were differences between his party and the BJP earlier, all the issues have been resolved now. The Opposition parties in Maharashtra took potshots against Mr Thackeray, who had once called Mr Shah ‘Afzul Khan’.

Speaking at the rally in Ahmedabad, Mr Thackeray said, “My father (Bal Thackeray) taught us that whatever we do, we should not do it from behind. We had raised people’s issues. We have neither backstabbed and nor will. Sena and BJP carries the same Hindutva ideology and my father used to say ‘Hindutva is our breath’. So if our breath stops how can we survive?”

The Shiv Sena and the BJP, who were sharing power both at the Centre and state levels, had been engaged in a bitter war of words in state for the last five years of the National Democratic Alliance (NDA) rule. Before the 2019 election, there were doubts whether the two parties would join hands or not. However, finally both the saffron parties decided to patch up and fight the polls together.

The Sena chief said that whatever happened in the last five years between the Sena and the BJP is past now.

However, Nationalist Congress Party (NCP) leader Ajit Pawar reminded Mr Thackeray about the insults that his party and the BJP had traded earlier. “There can not be turncoat tigers...” Mr Pawar tweeted.

Mr Thackeray responded to it saying “Some people are having stomach-ache due to the BJP-Sena alliance. Some people were rejoicing that the two parties with the same ideology are fighting with each other. We had some issues but after holding talks with Mr Shah came at my house, all the issues has been resolved,” he said.