The department, along with experts associated with forest department, visited the area on Wednesday. 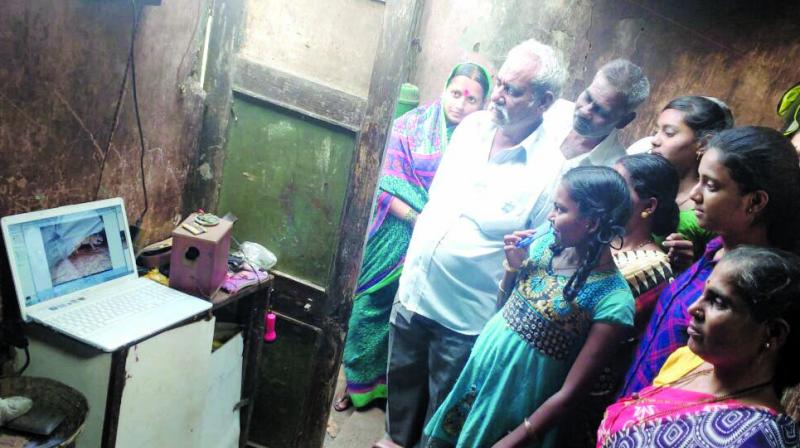 Residents in Ghodbunder area watch a documentary about leopards that was screened for them on Thursday.

Mumbai: The forest department on Wednesday conducted an awareness session for the locals of Ghodbunder area after a leopard, spotted passing by a slum pocket in the area, landed in a house on Sunday where a mother and her children were inside. The leopard, however, did not cause harm to the mother and children and instead picked up a puppy and left the spot. Panic spread in the area following the same, to control which the department conducted a session. The situation is brought under control.

Zanka Wedhe, along with her mother Ashal Wedhe were doing their daily chores when the big cat fell dropped down in the hut.

The department, along with experts associated with forest department, visited the area on Wednesday.

It is a small hutment of encroachment next to the hills on Ghodbunder road. “We went there, spoke to people and told them that they should keep an eye on the kids. The situation is well under control as people have been living with leopards since generations. People were also observed to be pretty cool and calm,” said Niket Surve, a researcher associated with the forest department.

He further added, “The half broken roof was made of urban tiles and the other half was covered by gunny bags. When the leopard fell, it got stuck on the roof which allowed the children and their mother to run away.” The family did not shut the door allowing the cat to leave. “This was a good move by the family,” Mr Surve said.

Sanjay Waghmode from the Thane forest department said that the residents at the time of distress knew what has to be done. “This was the main reason that the leopard escaped without harming humans and simply headed out. However, the bad condition of the roofs is a concern as that is what led the leopard to fall into the hut.

The department went to the area and visited various people to sensitise them. The locals were shown documentaries on leopards’ biology, and an inspection of the area was conducted.