Khan told the Judge that he fears that the UP police will kill him in a fake encounter. 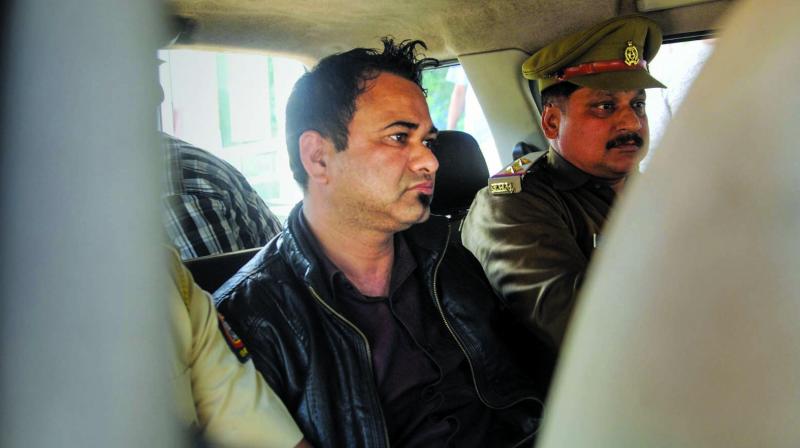 Dr Kafeel Khan, the Uttar Pradesh doctor who was jailed after the death of over 60 children at a government hospital in 2017, being taken away by the UP police, in Mumbai on Thursday. — PTI Khan was arrested on Wednesday from Mumbai airport for allegedly making inflammatory statements at AMU. (Photo: PTI)

Mumbai: A city court Thursday sent UP-based Dr Kafeel Khan to transit remand of the UP police in connection with a case registered against him for delivering an inflammatory speech during a protest against the CAA and NRC at Aligarh Muslim University.

A Special Task Force (STF) of the Uttar Pradesh police with the help of Mumbai police arrested Dr Khan at the Mumbai International Airport Wednesday evening.

The UP police produced him before metropolitan magistrate P.V. Bulbule at Bandra court and requested Judge Bulbule to grant them Dr Khan’s transit remand so that they could produce him before the concerned court in UP and seek his regular remand.

The police had arrested Dr Khan for delivering an inflammatory speech during a protest against the Citizenship Amendment Act (CAA) at the Aligarh Muslim University (AMU) in December last year.

Dr Khan told the Judge that he fears that the UP police will kill him in a fake encounter.

After speaking to Dr Khan, they said that there is apprehension that he could be killed in an encounter and be implicated in a false and fabricated case.

According to the lawyers, Dr Khan fears for his life because he is aware of those responsible for the death of 27 children in a UP hospital.

However, the Aligarh police assured the court that Dr Khan would be taken to UP under appropriate protection and he would be safe in their custody. After hearing the arguments, magistrate Bulbule remanded Dr Khan to three days’ transit remand. The UP police is required to produce him before the concerned court in Aligarh within three days.

The paediatrician had come to the limelight in 2017 when a controversy broke out after the death of over 60 children in less than a week at the BRD Medical College in Gorakhpur in Uttar Pradesh, where he was posted.