MMRDA slaps notices to contractors for failing to meet targets. 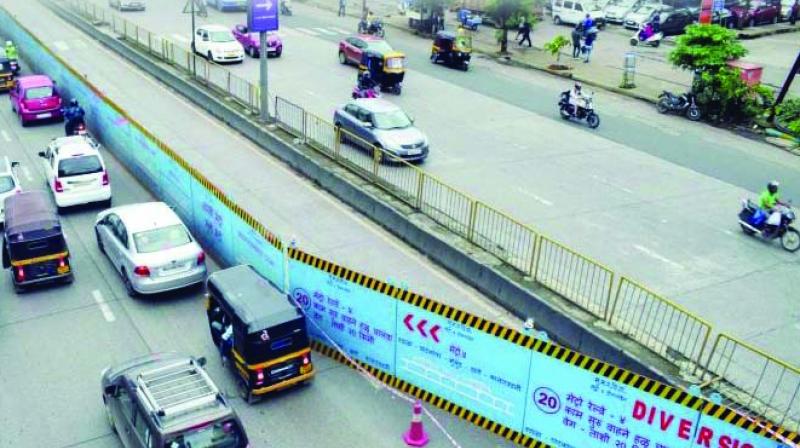 Meanwhile, the constructors said that the hindrance in obtaining tree cutting permission is causing the delay.

Mumbai: Metro-4 (Wadala-Kasarvadavali) and Metro-2B (D.N. Nagar to Mandale) works, which started this year, is limping due to alleged insufficient resources and manpower.

An explanation has be-en sought from all of th-em by the end of Dece-mber. Meanwhile, the constructors said that the hindrance in obtaining tree cutting permission is causing the delay.

MMRDA in its notice cited lack of progress in the works including test piles, soil investigation, utility identification, barricading, working piles etc. The notice highlighted that the contractors of Metro-4 were supposed to complete 80 per cent of the soil investigation works on or before September 27.

The Asian Age is in possession of notice copies, which reveals that except in package 9, none of the other packages (10,8,11) have finished at least 60 per cent of the work. “In any large urban infrastructure project, pace of execution depends upon identification of utilities and their workarounds apart from issues relating to encroachments, slums, and environment. We are working with MMRDA for quick resolution of on-ground issues and committed to timely completion of the project,” said a spokesperson on behalf of Reliance-Astaldi JV.

“Although the site is available for the contractor, insufficient man power and machineries have hindered the prog-ress of the works,” read the MMRDA notice. The authority had demanded to complete 70 per cent of the utility identification works before November 22, however in most packages about only 30-50 per cent of the work has been completed.

“There are numbers of trees on the alignment route. The MMRDA needs to find out a solution to it, as this is the main reason for delay,” said a spokesperson on behalf of CHEC-TPL.

He further added, “As per the tender, drawing alignment was between green belt (Teen hath Naka to Majiwada) where two rows of trees need to be cut and   transplanted, but the MMRDA has changed the alignment on road to save one side of the trees. As per the proposed new alignment, a 3000 mm diameter water line is passing along the road upto 1km, hence the alignment cannot be shifted. Also, a BPCL gas pipeline is running parallel to the road. Thus after receiving the contract, since last 7 mo-nths the alignment still needs to be finalised, wh-ich is causing the delay.”

Tree cutting permissions in the city has been hindered after the high court restrained Brihan-mumbai Municipal Corporation panel to clear any proposal until appointment of a tree expert in the panel.