Kamala Mills fire: All deceased were trapped in washroom

Initial reports suggested there were a few fire violations. 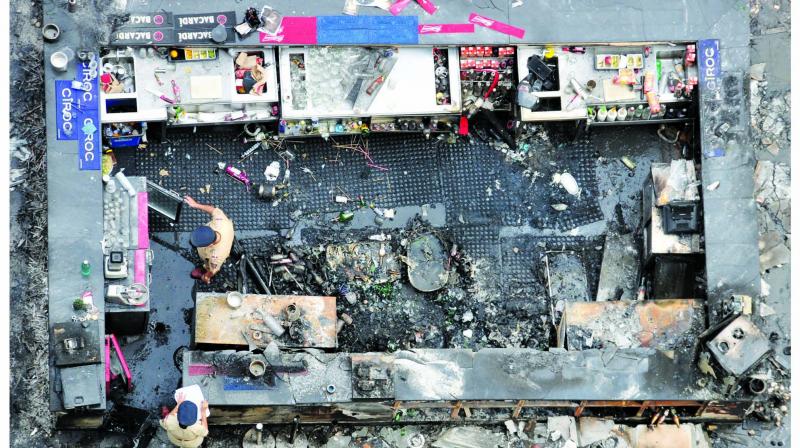 The aftermath of the blaze.

Mumbai: Fire brigade officers located all the 14 bodies of the victims of the fire that gutted two pubs at Lower Parel’s Kamala Mill compound, inside the washroom of the 1Above pub, one of the two affected pubs. The other pub that got gutted was Mojo’s Bistro. Fire officers said they did not find any burn injuries on the bodies of the 14 victims, who had apparently died of suffocation inside the washroom, where several other people had taken refuge from the fire that broke out at 12. 30 am.

Initial reports suggested there were a few fire violations. There was just one staircase for both entry and exit. Talking to The Asian Age, Deputy Chief Fire Officer Kailash Hivrale said, “All the dead bodies which were recovered from the washroom, died due to suffocation. There were three men and 11 women who lost their lives.” When asked if the restaurant is believed to be rooftop section working without a licence, he also said, “There was no fire system inside that structure.  As for violation of norms, that part is under investigation.”

Meanwhile, a survivor, Pratik Thakur claimed that there was a security guard who was directing people trapped in the fire towards the washroom. Talking to The Asian Age, Mr Thakur said, “The security guard kept saying, ‘go to wash room,’ due to which people started running towards the washroom.” He added, “After the fire engulfed 1 Above there was utter chaos and several women entered the men’s washroom which had no ventilation outlet.”

He also mentioned the ventilation was poor and the pub staff was not trained to handle emergency situations.