Some residents spotted the animal chewing on the foetus and informed the authorities about the same. 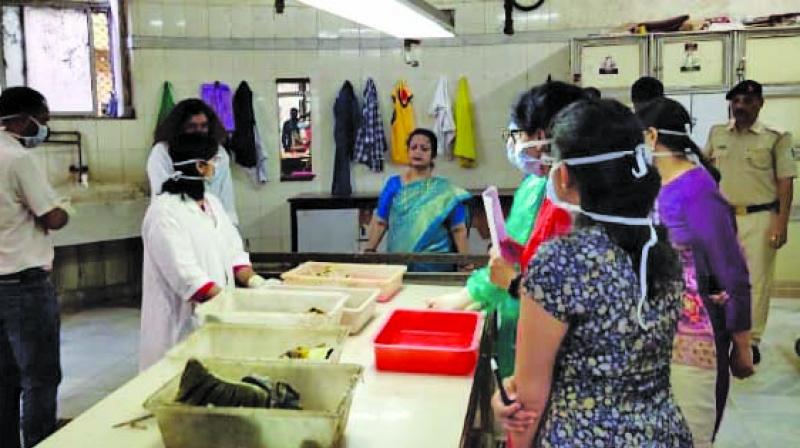 Mayor at the KEM Hospital.

Mumbai: Mumbai’s new mayor Kishori Pednekar visited civic-run KEM Hospital on Friday to conduct a surprise inspection after an incident where a cat was spotted by the cleaning staff dragging what was suspected to be a three-week-old human foetus at the hospital.

According to a senior staff of KEM hospital, the biomedical waste room was left open and the cat dragged the foetus to the nearby residential quarters. Some residents spotted the animal chewing on the foetus and informed the authorities about the same.

The civic administration ordered an inquiry to know how the cat got access to biomedical waste, which is supposed to be kept out of reach of everyone except the staff authorised to handle it.

Ms Pednekar said, “I had come to inspect the daily work of the hospital and I have also personally checked the work of all departments. The authorities have been asked to work on few things and I will make sure that it is implemented.”

The foetus, two to three months old, was sent for forensic analysis and the DNA was preserved for identification. “We found the foetus without the head. The cat had nibbled at it,” a doctor said.

Dean Dr Hemant Deshmukh confirmed the incident. “After the incident we have initiated an inquiry. The Bhoiwada police station has also registered an accidental death report (ADR) in this case. There were three cases of spontaneous abortions recorded on that day.”

The biomedical waste unit houses human tissue, organs, blood and amputated parts that are processed and disposed off separately from regular hospital waste. The BMC has issued a notice to the waste collection agency for not collecting biomedical waste from the hospital daily.