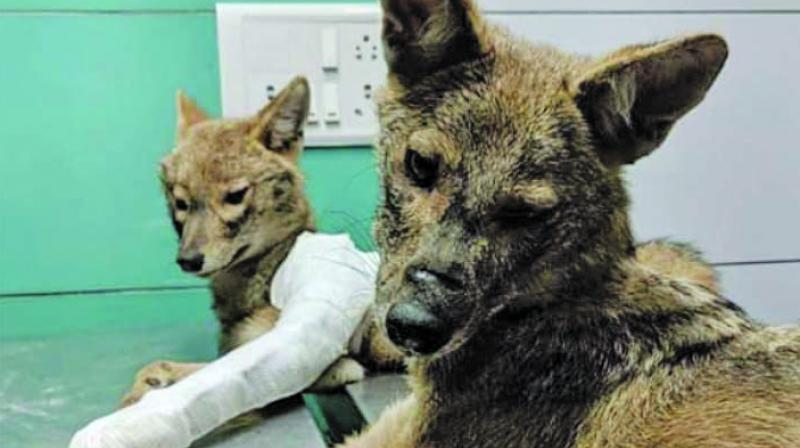 Mumbai: Two golden jackals were rescued on the same day by the forest department along with a wildlife NGO.

When the jackal found in a critical condition in Lokhandwala was brought by the forest department along with NGO Resqink Association for Wildlife Welfare (RAWW) early on Sunday morning, the officers got another call about another dehydrated jackal at Bhandup pumping station.

Wildlife enthusiasts who helped the operation stated that more cases of dehydration are surfacing owing to the sweltering weather and high humidity levels in the city.

“The jackal’s leg was stuck in a discarded fishing net. It was brought to the Thane forest office, after which we received information about another jackal. Both of them were dehydrated and appeared very weak. The other one rescued from Bhandup lay shocked and motionless due to dehydration,” said Pawan Sharma, president of RAWW and Thane wildlife warden.

The two jackals are  being treated in the clinic of wildlife vet Dr Rina Dey in Bandra and are in critical condition.

“The front limb of the jackal rescued from Lokhandwala is fractured, which has been plastered. The other one is still in trauma and is being given treatment. We have taken their blood samples, the report should come by tomorrow,” said an officer from Thane forest department.

There have been consecutive three incidents o jackals being rescued since Friday. In last three years, more than six jackals have been killed in road accidents.