This incident has brought back attention to the suburban railway’s infrastructure. 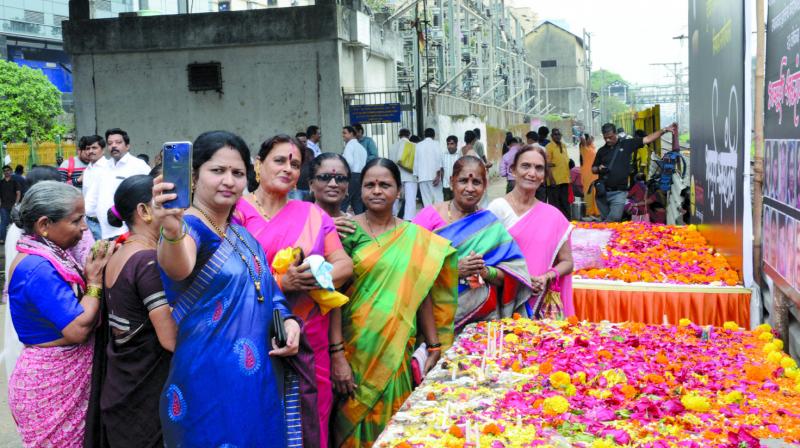 Sena workers pay tribute to those who lost their lives in Elphinstone Bridge stampede on its 1st anniversary.(Photo: Rajesh Jadhav)

Mumbai: The Shiv Sena women workers were seen clicking ‘Selfies’ during commemoration programme held at Prabhadevi railway station on Saturday.  It’s been a year since a major stampede at Elphinstone road station (now renamed as Prabhadevi) took lives of 27 people and injured many. A programme was organised to pay tribute to those who lost their lives in the stampede.

Several people reached Prabhadevi station on Saturday morning to pay tribute. The venue saw a race between Congress and Shiv Sena as the Congress leader Sachin Sawant paid tribute late at night on Friday whereas; Sena workers held their programme on Saturday morning.

Few of the survivors too visited the spot and paid respect to the deceased. Shilpa Vishwakarma (21), a medical student at Parel’s KEM Hospital said, “This is an unforgettable day for me as I was present there at the spot when the incident happened. It feels like God has given me a second chance to live.”

This incident has brought back attention to the suburban railway’s infrastructure. Army  was appointed to build a new bridge at Parel — Prabhadevi station. It  completed the work of building a new bridge connecting both sides. The Central Railway also modified the Parel bridge to divert the crowd.