The Department of Transfusion Medicine was also alerted about the scarcity. 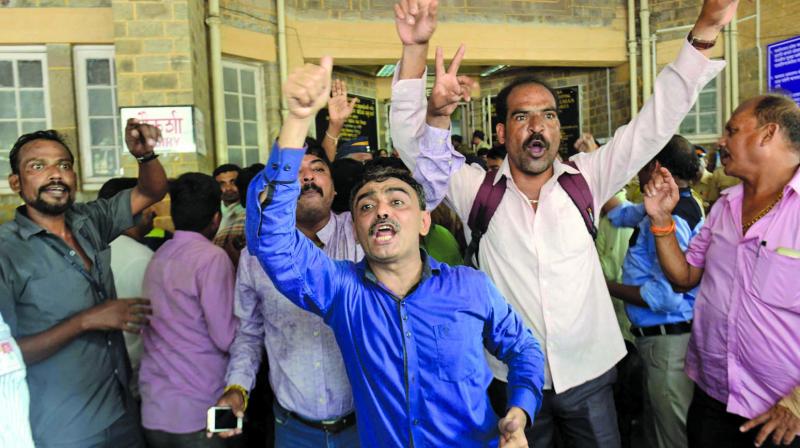 Commuters call out the name of their blood group outside KEM hospital so as to help meet the shortage. (Photo: Rajesh Jadhav)

Mumbai: While injured patients kept coming in KEM Hospital after the Friday morning stampede at the Parel-Elphinstone Road FOB, the blood stock kept on decreasing. Negative blood groups like A, B, O and AB were nowhere to be found in the hospital's blood bank department. However, the department officials, said that after the issue was highlighted on TV channels and WhatsApp messages, people from all over the city reached the hospital to donate blood.

The Department of Transfusion Medicine was also alerted about the scarcity. Most of the donors who arrived, had positive blood group but patients needed the negative one. The hospital faced a tough time trying to accumulate blood. Around 123 units of blood were collected via blood donations on Friday. Responding to messages on social media, people came all the way from Pune, Kalyan and Dombivali just to donate blood. Many office workers with offices near KEM did their part by donating blood. “However, most had a positive blood group while the need is for the negative blood groups, especially O and AB which are quite rare to find,” said an official.

Talking to The Asian Age, Ganesh Ambodkar, a senior technician, said, “Thanks to social media and the donors who were generous about donating blood. We have said ‘no’, for the first time to donors who wanted to donate blood.  The blood collected has been used for the injured,” he said.

A help desk has been  created near the reception at KEM Hospital for family members of victims. By submitting details of the missing persons along with a photograph, the helpdesk will help them to loacte their fmily member by searching for them in the causalty department, emergency department or the mortuary section, if dead.