According to eyewitnesses, the stampede was triggered by rumours of the FOB collapsing, a short-circuit and broken stairs. 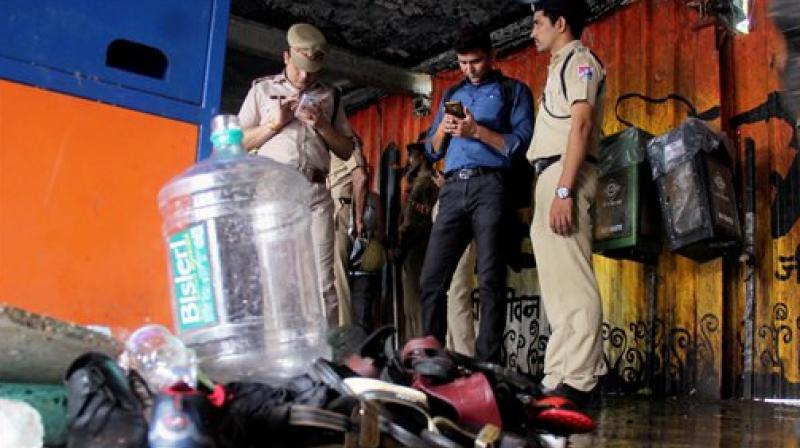 People and police look on at the site of a stampede that broke out on the Elpistion Railway Station bridge in Mumbai. (Photo: PTI)

Mumbai: At least 23 people were killed and several others were injured in a stampede at the Parel-Elphinstone foot-over-bridge (FOB) in Mumbai at around 10.30 am on Friday.

The death toll rose to 23 on Saturday after an injured succumbed to injures.

According to eyewitnesses, the stampede was triggered by rumours of the FOB collapsing, a short-circuit and broken stairs, at a time when approximately 9,000 commuters were present on the bridge.

The Railway Protection Force and citizens swung into action immediately and tried to rescue those trapped in the melee. The fire brigade arrived at around 11.35 am to carry out rescue operations even as the dead and the injured were rushed to the civic-run KEM Hospital.

Around 2 lakh passengers from platform no. 1 at Parel and platform no. 2 at Elphinstone Road station squeeze themselves on the 30-year old FOB every day during the morning and evening rush hours.

Despite multiple warnings about the possibility of a disaster occurring, no step was ever taken. In the last one year, many commuters had taken to Twitter to voice their concerns about the FOB, tagging both Prime Minister Narendra Modi and the then railway minister Suresh Prabhu.

Last year, Shiv Sena MP Arvind Sawant even wrote to Mr Prabhu calling for repairs on the bridge. Replying to his letter, Mr Prabhu had given his assurance that the FOB would be extended and widened and even sanctioned Rs 11.86 crore for the same.

Mr Prabhu’s successor, Mr c called for a high-level inquiry into the incident. He has called safety officers as well as railway board members from Delhi for a meeting on the disaster.

Ironically, the Railways uploaded tenders for extension of the fateful FOB on Friday.

However, the railways clarified that the tenders were not uploaded in response to the stampede that occurred on Friday.

Akash Kotecha, a lawyer who was lucky to survive the stampede after someone broke the bars of the stairs and pulled him out said that rumour mongering led to the tragedy.

“The rush today morning was similar to what we see almost every weekday. But today, the fact the rains had slowed down the crowd and there were all kinds of rumours floating around, created panic among those who were on the foot-over-bridge,” he said.

“There were rumours about a short circuit, the Elphinstone end of the bridge collapsing and some staircases breaking,” he added.

Another eyewitness, Sambhajit Verma, who was stuck in the middle of the FOB at Elphinstone said, “I was being squeezed by the crowd from both sides. People kept screaming that the bridge had collapsed and they reacted by trying to save themselves,” he said.

Vibhishan Jhadhav, who travels from Santacruz said that someone from the crowd shouted that the bridge was going to collapse. “After that, people just panicked and started rushing down. This led to a blockade from both sides and increased suffocation on the bridge,” he said.

According railway sources, a train had come into platform no 1 at Parel, going towards Chhatrapati Shivaji Maharaj Terminus (CSMT), as well as platform no. 2 at Elphinstone Road.

An official said, “Two trains arrived at the same time during peak hours at both stations. People were going from one end to the other. We feel that at least 9, 000 people use it during peak hours because each 12-coach train carries around 4, 800 commuters.”