As per the guidelines by the MSBSHSE, schools are given a pre-made timetable during which they have to conduct the exam. 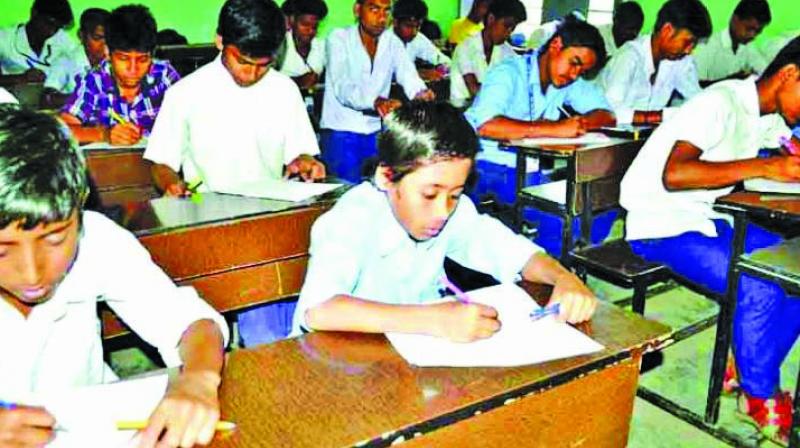 MUMBAI: In the ongoing baseline tests in the schools, which are conducted for grade 2 to 8 students, during the exam hours students are seen sitting next to each other due to non-availability of classes in schools. Moreover, several schools are allegedly even making students sit with grade 9 and 10 classes while the latter students are taking their subject classes and the former giving the examinations.

Baseline tests are supposed to check the appropriate age level of understanding of the students in the aided schools, which is managed by the Maharashtra State Board of Secondary and Higher Secondary of Education (MSBSHSE).

A teacher of a Juhu-based aided school, on the condition of anonymity told The Asian Age about how the baseline exams are poorly managed in the schools. “We already have classes for grade 9 and 10 students which is as important to finish on time as the baseline tests. Hence, we are making them sit in the same class with higher-grade students. All we could do is to teach in a lower voice and ask the students to keep quiet so that the students appearing for the exams are not disturbed,” the teacher explained.

As per the guidelines by the MSBSHSE, schools are given a pre-made timetable during which they have to conduct the exam.

They are even instructed to prepare seating arrangements for the students. As per the schedule, baseline test is scheduled from August 28 to August 31 from 11 am to
1 pm.

Whereas, in other schools owing to less classrooms, students are allegedly sitting on the same bench where they give the exam.