37 organisations held a press conference in Mumbai on Wednesday in support of the arrested activists and called the government’s action “dictatorial”. 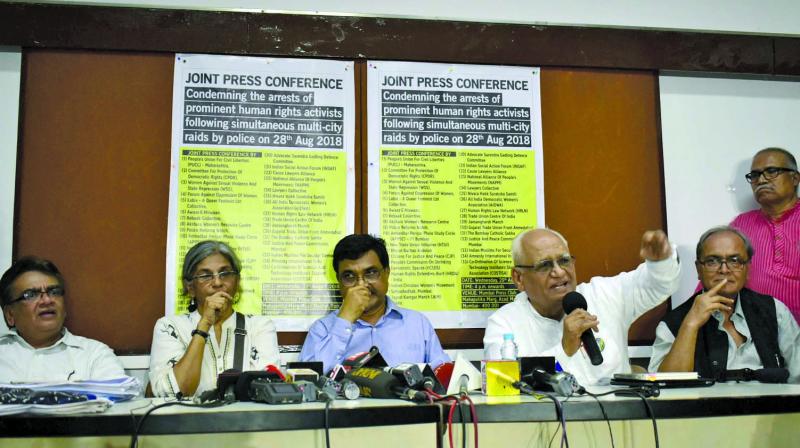 Mumbai: Prakash Ambedkar, Bharip Bahujan Mahasangh leader and grandson of Dr Babasaheb Ambedkar, has called the arrests of five left-wing activists in the Bhima-Koregaon case an attempt to silence the country’s masses. He has termed the government’s attempt as “anti-democratic” and said that it will backfire.

Meanwhile, 37 organisations held a press conference in Mumbai on Wednesday in support of the arrested activists and called the government’s action “dictatorial”.

Mr Ambedkar told press persons on Wednesday, “These activists from different NGOs do not contest elections. Their motive is only to safeguard democratic principles in the society. The government is trying to damage the democratic structure here and so, these false arrests have followed.”  He predicted that the action would fail to terrorise the activists and they would keep working for the society more passionately.

On Wednesday, the gathering of social activists from different corners of the country also addressed the media, coming out in support of the arrested activists.

Anand Teltumbade, whose home was raided on Tuesday by the Pune police, said, “This is vindictive politics of the government. The people being taken into custody are innocent and have nothing to do with the violence. Rather, the government is best aware of the culprits behind Bhima-Koregaon but is trying to save them.”